I've blogged before about Pierce participating in Odyssey in the Mind, something I did myself as a kid.  If you haven't heard of it, Odyssey of the Mind (or OM) is a creative problem solving challenge in which teams of seven kids choose from one of five problems and create a skit or structure or vehicle.  There is also a portion called "spontaneous" where they have to do a short term problem the day of competition that they don't know about beforehand.  Pierce was on a primary team in first grade (they present their project/skit, but don't compete), but has been on a competitive team the other years.

Last year Cort and Reid saw how much fun he was having, and asked to be in OM as well.  I talked to the teacher coaching Pierce's team last year, and she was nice enough to coach a primary team with the twins if I would coach that primary team with her. She has a lot of experience, and the kids all love her. This year Pierce migrated to a different team of mostly 5th graders (everyone else on his team from last year left for middle school), but Mrs. Harden and I stuck with the primary team from last year - only they progressed to being competitive this year.

The kids chose the problem of Stellar Hangout.  They had to create a space relay station with aliens.  There had to be a human worker, space food, entertainment, and a quest for treasure.  The kids have been working on this since October.  The last couple of weeks we were meeting for a couple of hours after school every single day to try to tie it all together.  The coaches are only allowed to give guidance and provide supplies - the kids have to create everything and write all the lines.  The more creative and outside the box, the higher the score. (Pierce's team chose a problem where they made a Mockumentary of a children's classic - they chose Peter Pan).

Saturday was the regional competition.  Here are Cort and Reid in their alien pop star costumes: 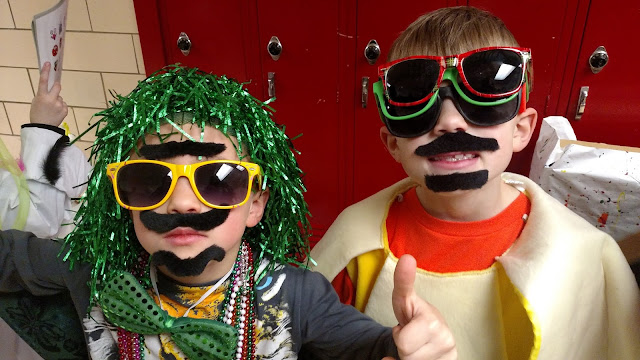 The teams worked really hard and had so much fun.  What energy!  What creativity!

At the awards ceremony, we found out that Pierce's team placed second in their category.  They were thrilled - they really did have an adorable skit.

And then came time for the Stellar Hangout awards.  They were up against 13 teams total.  I think Mrs. Harden and I were both a little shocked when they won first place.  They have a wonderful skit with very creative elements, crazy costumes and unusual props, and a catchy and hilarious song, but they're a young team (all 2nd and 3rd graders).  I just never expected it to happen, especially their first year.  So they get to go to the state competition in Newport News next month.

So it looks like I have a few more weeks of OM practices in my future.  I'm happy for the kids - they really worked hard for this.  It's going to be a fun adventure, and I'll let you know how it goes!

A friend of ours coaches a local high school team, and two of his kids are participants. They just LOVE it! I wish there would have been something like this when I was in school!

What a great activity, congrats to all

Hooray! Lots of work and fun...and then an award! This sounds like an incredible program.

...my son back in 1980 was involved with Odyssey of the Mind, he still is a creative guy.

I have heard of OM before; what an amazing concept for the kiddos. Congratulations to all of you on your accomplishments! Wowza!

Sounds like an awful lot of work, but it turned out to be worth it. As the old saying goes " a good time was had by all." Your boys did well.

Wish I could have seen it. Just by looking at these costumes, it must have been great. The costumes are so cool, and amazingly original and creative. I can't wait to hear about next month; take lots of pictures!

Way to go, boys! That's such a great experience for them!

How wonderful, Lisa. Anything using their creative minds is so great. I'm happy for both Pierce, and the twins. You find the best things for them to participate in.

Bravo, way to go this is just wonderful!

Congrats to all of you! I think this type of activity/problem solving is great. I hope they do well in their future competition.

Just stopping by. Those are some awesome alien rock stars!

Wow, I'm impressed. This all sounds very exciting to me and I love how creative they have to be all on their own. Second place was awesome for Pierce. How exciting for his team. Also very exciting is the Reid and Cort won first place. They must all be thrilled!

What a lovely opportunity your boys have to develop their creative and artistic skills. Well done for guiding them in this direction. They can only benefit from this in their years ahead.

This looks fun! My son Mica had the opportunity to do that this year, but declined. I was so annoyed that he didn't try it! He can be kind of judgy when it comes to things he's never done. Many he would have been good at it.

It looks and sounds as if a very fun time was had :)

Awesome activity by all! Congrats to you all!

What fun! They look awesome.

I have heard of OM but never seen it or participated. It sounds really fun and I love how creative it is. Congrats to Pierce's team for their placement. And the twins must have been thrilled with 1st place. Lots of hard work all around! Good luck with the next step!
~Jess

It sounds fun and so creative, Congrats to his team.

That is really fun! I'd not heard of it!

That's the very best kind of surprise. Big congrats to them!

Congratulations! What an exciting but well-deserved surprise! I love projects that inspire creativity. Kids need more of this, in general, these days. I love their costumes!

Wow... I must recommend this to my son's form teacher. Sound like a very beneficial activity. Make the mind creative.