Reid in Pierce are smitten by all things aviation, so we took them to a branch of the National Air and Space museum that is located outside DC, near the Dulles airport.  It has a huge observation tower to watch planes taking off and landing.  The boys were going crazy running back and forth from side to side, trying to see every plane. 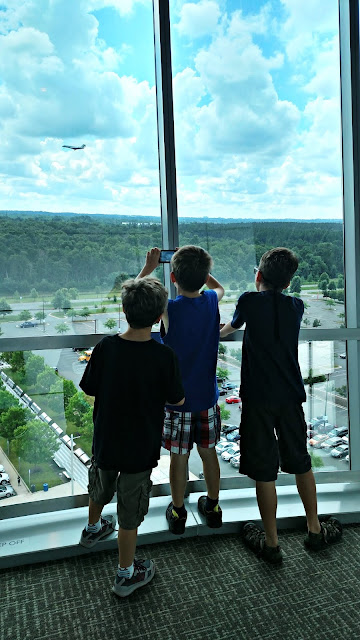 They did a number of flight simulators.  There were several different types to choose from. 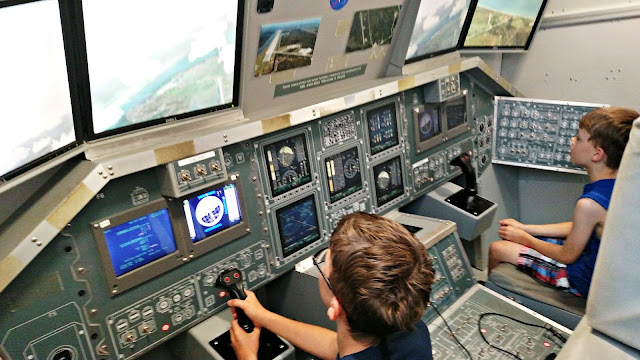 Of course, one of the highlights was the Discovery space shuttle.  We enjoyed watching a video of its last flight. 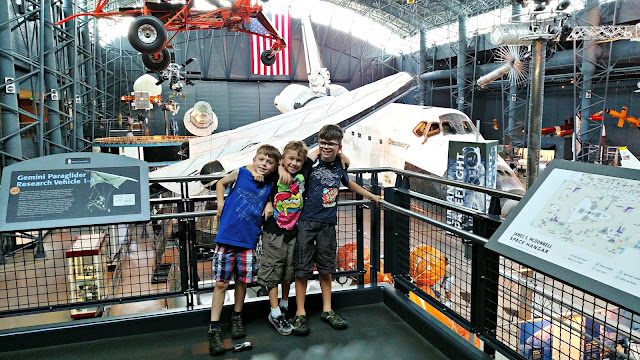 With two hangers and the tower, this is a huge museum.  We spent about 4 1/2 hours going through it. 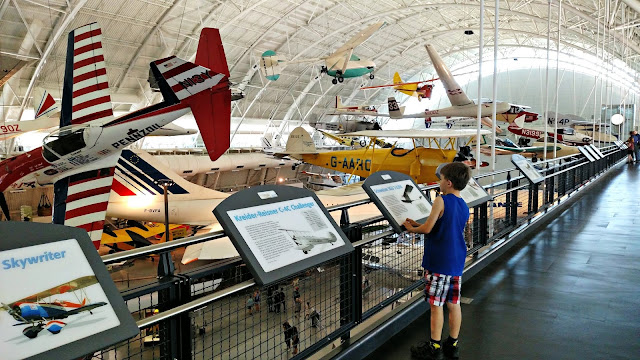 It was much less crowded than the Air and Space museum in DC, which was also nice (plus, the boys had been to the one in DC before).  Being Smithsonian, admission is free.

Oh my gosh, what a great place to visit, enjoy and learn at the same time!

Boys! And your three are growing up at a fast rate now! For myself I would not have liked being in that sort of museum, this being said from experience when I took my two boys (and daughter) to an RAF museum in the UK lots of years ago. I think I wandered off and sat in the car, leaving my then partner to do the necessary supervision!

What a great adventure for them! It looks like they had a ball! These places ARE fascinating. Phil & I went to the small one in Richmond. Surely this is not the REAL space Shuttle....or is it?

Oh how special... I can understand why your boys are interested in Aviation. Mine were too. Interesting --comparing all of the different interests boys have --as they grow and learn. My eldest loved scuba diving--and all things under water. My middle son loved music/band and people. My youngest loved astronomy, computer art (went to the Art Institute). All three loved SPORTS (esp. football, baseball, basketball)...

These days (as 55,48 and 47 year olders), my youngest works in finance --but has an interest in many things. He enjoys audio books of all kinds --and listens to them going to and from work.. Middle son is a home builder, and loves being with people and enjoying life to its fullest. Older son is an introvert --and seems to spend much time contemplating life and its meaning...

Have a great day/week.
Hugs,
Betsy


What a great place to take the boys! Perhaps one or two of them will be pilots some day.

You guys always find the best places to treat the boys! I can only imagine the excitement. :)

Nice to see they have an interest in aviation. I like the flight simulator. Looks like a good time!

Interesting! My son will so happy to visit that place and do so many things there.

Admission is free but parking is expensive. We went some years ago with a group. It's a great place for folks who love airplanes and space ships.

It sure looks like your boys enjoyed themselves! I would love this museum too. Sounds like a good trip for us to take when we don't have cows any more...it's a little too far for a between milkings day trip.

I have to admit that I think I would enjoy going there. How exciting for the boys. I would love to try a flight simulator.

Wow, I'd say your visit was a true hit. I can't remember the last time we went anywhere indoors for over four hours of entertainment. It sounds like you may end up having a pilot or two in the family :)

We have a museum like that here in Nebraska. How fun!

I would love to visit the space center. Looks like a fun place for kids and grownups!
~Jess

That's wonderful. I can't believe I've been covering commercial aviation as a side line so long and interviewing CEO's. For me, as an adult, it began with a curiosity of what made certain airline leaders "tick". But the boys are better off having good fun with the planes themselves! Summertime!!!