So this Mom walks into a bar...

Last night was the monthly meeting of the local multiples club.  They had a swap this time of your unwanted junk.  I scored a couple of pie pans (which will come in very handy during apple season next fall -- this year I think we made about 20 pies off our apple tree), some holiday ribbon for next Christmas, and some Tae Bo tapes.  Not sure I'll ever use the tapes, but hey, they were free.  Wonder if Pierce would like Tae Bo?  Might be a good way to get out some toddler energy.  After the meeting, a group went out to a local bar.  I don't remember the last time I went to a bar.  I think it's been well over 4 years (gasp!).  And apparently I've forgotten the rules of a bar.  Because I'm pretty sure they don't include getting your Wet Ones antibacterial wipes out to wipe off the sticky table when you sit down.  Shameful, isn't it?  I'm surprised they didn't kick me out. 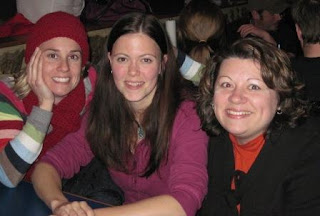 This is Jaime, me, and Deena (the club president) 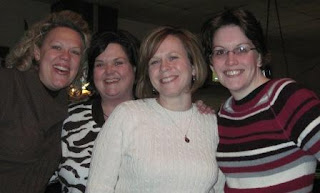 And here are Tosha, Shelly, Julia and Laura
A fun, fun group of women.  And we didn't even talk about our kids....much.
I am a total loser and left at 10:00.  Just in time to skip out on karoake.  Because if I had sung, they really would've kicked me out of the bar.  And then when I heard that if you don't sing, you have to be a backup dancer, and I knew I'd better leave pronto.  In fact, I'd better run out as though the place were on fire.  My dancing has been compared (shamefully, more than once) to Elaine on Seinfeld.  Had I stuck around to dance and sing, the bar owners would've put my picture up behind the register with the word BANNED.
And so I got to bed at 11:00 last night, a whopping two hours later than usual, and I felt like quite the party girl.  My hair reeked of cigarettes.  Ick.  It was really smoky in the bar.  My hair absorbs smells and it'll probably take days to get the smell washed out.  Yuck.  I got an hour or two of sleep before Cort woke up.  And screamed. And screamed.  And screamed.  We had decided that now that they've hit 5 months (today!) we were going to make them wait until 3 am to eat.  Yikes.  It made for a rough night.  And after he ate, he screamed some more for good measure.  I ate four pieces of pound cake during the screaming.  Comfort food at 2 am.  Great.  Then I drank a root beer.  Oh yeah, healthy. 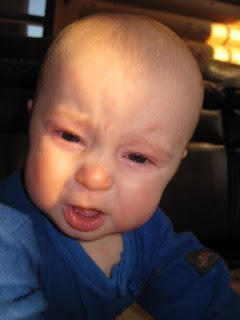 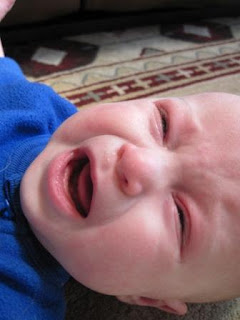 He's still grumped up this morning (as am I, imagine that).  Wonder if he's teething?

love it lisa!! sorry you didnt get any sleep last night. personally, i was very thankful for your anti-bacterial wipes last night. SO glad you made it out with us. lets do it again...
btw, turned out, we didnt do any karaoke. =)