Memory Lane Friday - This One Time at Camp


Memory Lane Friday is a time to reflect on memories to preserve them for your family.  This week's theme is 'This One Time at Camp'.

I went to several different types of camps, but my favorite was a church camp I attended the first week of August every year in Bethany Beach, Delaware. For whatever reason, it was simply called "Conference". All summer long I looked forward to camp with great anticipation. Only high school students attended. Each day consisted of chores, meals, reflections, talks in your individual groups, and plenty of free time. My friend Melissa and I would baste in baby oil (shaking my head is shame here) and hit the beach. Of course, there were also plenty of shops to frequent and such delicacies on the boardwalk as boardwalk fries, ice cream, and snow cones.  The food at camp itself was less than desirable, which is why I had to buy so much boardwalk food.                                         Example A: 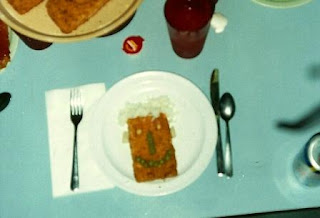 Food so bad that I turned it into artwork rather than eat it.
One of the highlights of the week was the shaving cream fight.  Well armed with 2 cans of shaving cream, we'd don our swimsuits and have at it.  Here, the start of the fight: 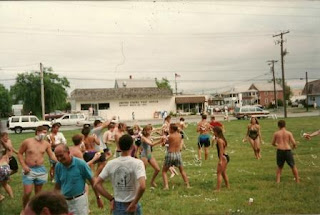 After everyone was well coated in shaving cream and had designed mohawks out of shaving cream hair, we'd run down main street, down the boardwalk, and into the ocean: 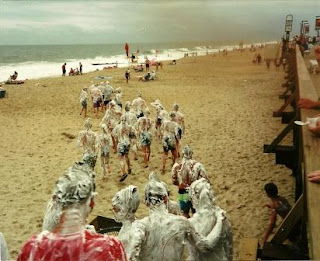 One year a couple of the guys got in trouble for hugging random people along the way that they saw on the streets.  As you might imagine, 'random people' didn't care so much to be hugged by a stranger covered in shaving cream.  Believe it or not, there's a facebook group devoted to the shaving cream fight.  And it has well over 100 members!
The final night was full of skits: 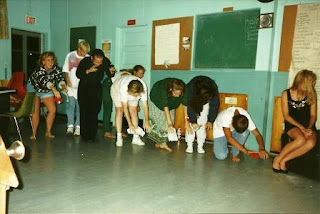 I don't remember many of the skits (although I have oodles of pictures from them).  One year a girl sang one of The Little Mermaid songs PERFECTLY and impressed us all.  Another time some guys did Blue Moon in acapella (Elvis would've been proud).  And once a group did this nasty skit where they chewed up food and spit it into each others mouths (so gross).
At the end of the last night was a giant 'hug circle' which lasted well over an hour and gave every one a chance to say nice things to new friends and in some circumstances, exchange a kiss or two (ahem).
Want to participate in Memory Lane Friday?  Grab the code below the button and copy/paste it into your blog.

Then come back and put your website into Mister Linky:
Come back next week for the topic of "A Favorite Movie".  Is there a movie you watched over and over again as a kid?  That you knew every line to?  Be ready to share!