I'm still recovering from running the NYC marathon, but I wanted to run my local half marathon this past Saturday because I haven't run it the past couple of years.  Plus, it was going to be beautiful weather, and I would get to see many of my running friends.
Unfortunately, since NYC, my knees have been a little grumpy.  In particular, my left knee.  Lefty has been acting like Righty used to act prior to knee surgery back in December of 2004.  The surgery was to correct a misalignment of my knee, caused primarily (according to my knee surgeon) by all that horseback riding I did as a kid during my growth spurts.  He said it was very common to see the problem in people who grew up doing bent knee sports, particularly women who were tall (I'm 5'8).
So I decided to dig around in my closet to find the old taping kit.  Back when Righty was a problem, a physical therapist taught me how to tape him into place, which held me over until I had the surgery done.  So I thought, hey, I'll try that on Lefty. 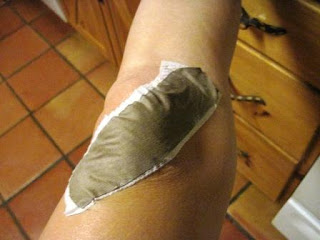 I confess I also took a couple of ibuprofin pre-race, to take any knee pain I might encounter down a notch.
Here I am, waiting in line for the bathroom pre-race. 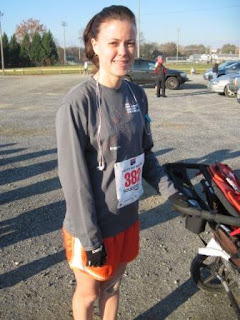 My cheer team, who became grumpy very early on, only cheered for me the first 2 miles before demanding a return to home: 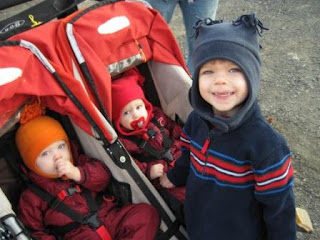 The race started about 30 minutes late, due to a miscommunication regarding the closing/blocking off of streets.  Fortunately, they got it resolved, but the race did start a little late as a result.
The starting line: 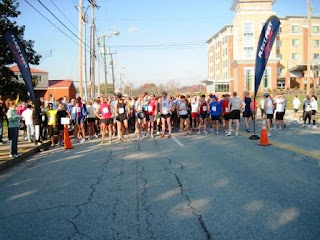 My cheer team snagged this picture around mile 2 just prior to getting WAY bored and heading home: 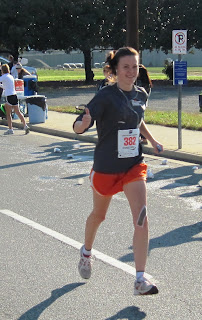 It was such a nice day and I definitely could've run in a t-shirt had I known it would warm up so quickly.
As always, I did not wear a watch to race.
In this race, they didn't have a single split time!
Usually at races they have people or clocks stationed at various points to tell runners their time, so you can gauge how you're doing.
So I ran the race in the dark, so to speak, and just listened to how I felt as I pushed through the miles.
My knee was behaving quite well being taped into place.  I was pleasantly surprised.
However, around mile 8 it hit.
My legs just had such heavy fatigue.  It became obvious to me that they were still recovering from NYC. It felt as though they were going to refuse to run another step.  I ate a couple of Luna gummies for energy.  I pushed on but it slowed me down quite a bit.
In fact...around mile 10 I was passed by my ob/gyn and his EIGHT year old.  Rock on, that kid can run!!
Mile 11 involved a Very.Big.Hill.  The hill under the Jesus Saves sign, for those of you who are local.  I didn't walk it at all, but my legs weren't turning over very fast at that point.
I finished the race in 2:00:17, which is a 9:11 per mile pace.  Had I known I was that close to the 2 hour mark, I would've pushed it out enough at the end to have at least broken it.  But I'm happy enough with my time; glad I got out for the race.
Here's the finisher's medal: 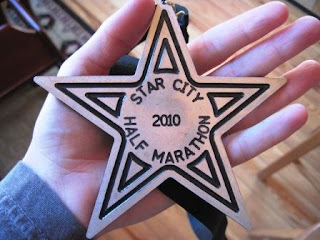 You did great considering you're legs had to be totally dead from NY. I did not know their were no mile times. Somebody needs to get you a Garmin! :-)

What an adorable cheer team you have! :)

I am glad you made it through. Love that the whole team got to see the race~

So when the surgery schedule for? Hey, is that a giant chicken tractor being built in the field?...:)JP

You are a rock star! Awesome job and that is a pretty cool metal too.

You are amazing.
Sandie♥ HAPPY THANKSGIVING

hey- i just found your blog when i was searching for pics from the race...this sounds weird but i think i may have been standing next to you at the start when a few girls were asking you about the new york marathon...im moving down to roanoke in january so maybe ill see you at some more races in the future...great job on your time!

You are my hero and boy what an adorable cheering section you had!!! :)