Chia looked out over the fields of organic cane sugar with her dark almond eyes and sighed.  Although it was only early September she could tell that winter was on the way, and from the feel of the nip in the air, the texture of chill on her whiskers in the early morning hours, she knew that it was going to be a rough one.  As the sun slowly rose over the eastern fields, Chia paused to let the rays warm her fur, rolling down across her back and over her bushy tail.  Finally, she pushed herself up off her paws, having lingered too much, as she had much work ahead of her.
Prior to setting off, she peaked her head in the cubby hole of her tree, gazing fondly on her son Buckwheat.  He was nibbling on a few hulled hemp seeds, his tiny paws tossing the husks to the side.  His sister, Cinnamon, had perished a few weeks prior, when a great owl had swooped and caught her just as she scurried up the tree in the dusk.  Since then, Chia had been leary of allowing Buckwheat out in the early dawn or late evening hours, so she forced him to stay put when she ran errands before daylight was at full capacity.  Chia chirped her goodbye and scampered down the tree, before sadness had a chance to grip her heart completely, like it had two weeks ago when they almost starved from her melancholy.
As she reached the foot of the tree, Chia scented the air.  The faint whiff of apples, slightly dehydrated, rode on the winds this morning.  The land was in dire need of rain.  Chia took off across the dusty fields, headed towards her first stop each morning, the children's swingset.  It was just to the side of The Big House, the one where the people that owned the fields lived.  White, wooden, and looming, it wasn't unpleasant to look at, but Chia knew it held numerous dangers within its walls and borders.
Tentatively, she scanned the house before she approached the swingset.  It was early, and all was fairly quiet except for the reassuring song of the birds.  Chia loped over to the swingset and sniffed.  She smelled sweetness, right there, to her left.  Her eyes scanned quickly, and she had no trouble spotting the source.  Raisins!  A whole treasure trove of raisins right there on the ground.  Why, there must be at least twenty there!  Quickly, Chia began stuffing her cheek pouches full.  They were made to expand and flex, so even as small as she was she had no trouble stuffing the raisins in.  She might have paused to eat a few, savoring the sweetness, but she wanted to get back to Buckwheat as soon as possible before he could get into mischief.  He was always in the back of her mind, and she knew how much he would love these raisins.  They could eat a few this morning, and then store the rest for the winter.  She had a lot of food foraging to do to get ready.
Once Chia was sure she had all the raisins, she began the journey back to her tree, moving at an easy pace.  Stretching her legs felt good, and the sun was a little higher now, causing mists to waft over the fields.  Chia hurried her pace, eager now to indulge in the raisins.  As she ran, she silently thanked the Great Celtic Goddess Sea Salt for the bounty.  Her tree grew and morphed, and she closed in on the distance.  Already, chirps were coming involuntarily from her throat, alerting Buckwheat of her return, of her finds.
Nothing.  Empty silence loomed, and her heart beat faster.  Not even the birds were singing.  Where was Buckwheat?  Why wasn't he answering?
This story was inspired by the prompt at The Red Dress Club.  The assignment:
For this week's prompt, grab something out of your pantry and write a short piece - using all the words in the ingredients. It can be fiction or non-fiction, poetry or prose. 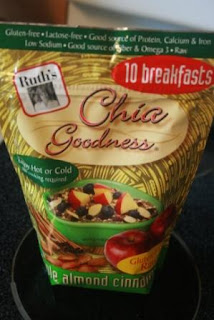 Ingredients:  Chia, buckwheat, hulled hemp seeds, dehydrated apples, almonds, raisins, organic cane sugar, cinnamon, Celtic Sea Salt.
Incidentally, Chia Goodness is awesome.  It comes in different flavors - even chocolate. If you haven't tried it, you should.  I have a tablespoon stirred into my oatmeal each morning.  Chia seeds are a super food!
The link will be up on The Red Dress Club Friday, so if you want to try to write on this prompt and join in, go check them out:

wow. that was impressive. i don't fancy myself much of a write and i am always blown away when i come across this kind of bloggy goodness!!

Love the story -- I feel like I am there. Thank you for warming me up on this cold morning! :)

Where is Buckwheat? Didn't he listen to his mom? Well, done! This is wonderful woven.

That was GREAT, Baby Girl! I did one as well...stay tuned tomorrow. I may have faux pa's however compared to yours!!!...:)JP

I'm afraid for Buckwheat and his mom - is there a hawk in the vicinity? Ugh!

Now that was good! You have a way with words! Well done!

What a great creative writing exercise!

OK, you really shouldn't leave us in fear for Buckwheat's life ... its Friday, this is my Happy Day ... and you left me all distraught.
(which I guess translates into the fact that you did a really great job!)

This is wonderful-and I love that it is told from the point of view of an animal-fresh and clever!

What an inspired choice!

I may worry about little Buckwheat all day, though...

What a delightful story! This is told so well! Your word choice adds to the tone of the story well "whiff of apples" "loomed near". Love it! Well done!

Great story :-) I think I said this last week, but I love these writing ideas. One of these days I will have to try it out.

I love it. Truly love it. I'm thinking of them now, these poor little creatures. I need to know where Buckwheat is, too! :?<

I really really really really enjoyed this story. I chuckled at the antics, ached for her loss, and my breath caught when she came back to the quiet and Buckwheat is gone. I also LOVE the names of your characters.

I love how much Chia loved the sweetness of the raisins and that 20 was a huge bounty. I hope Buckwheat is just being rotten.

Poor little buckwheat! Didn't he listen to his mother??

Very fun choosing the perspective of a creature.

aw, I hope Buckwheat is okay. Great piece, I really enjoyed reading it. :)

What a delightful story! I really hope Buckwheat is just ignoring Mama :-).

Not Just Another Jennifer said...

Wonderful! I'm loving everyone's interpretation of this prompt! If I hadn't know about it, I wouldn't have noticed the ingredients. I'm dying to know what happened to buckwheat? Never heard of Chia - will have to look for it.

Oh! Poor Buckwheat! I hope he is okay...

I really liked this. It was so sweet and it bounced around just as I'd imagine a squirrel would.

Oh no... where is Buckwheat! please don't kill him please.

I'm usually not a fan of anthropomorphism in fiction but you've done a wonderful job with this. I enjoyed the pace and the description of nature that you've managed to keep detailed without being tedious.

No!! Not Buckwheat! Seriously, I gasped when I read that.

Don't judge. Yes, it's a chipmunk, but I am still feeling for that pure, melancholy mourning momma.

Very nicely done. I enjoyed this top to bottom.