Pierce broke his arm on June 1st, so it's now time for an update.  Nine days after his surgery, he started complaining of a sharp pain where the pin was located.  I tried not to panic when I discovered one of the pins sticking out of the cast.  Indeed, when we took him in the next day, x-rays showed it had slid out of place a bit.  His doctor explained that this was the downfall on using pins instead of screws, but that pins were still preferable with children as they are easier to remove. 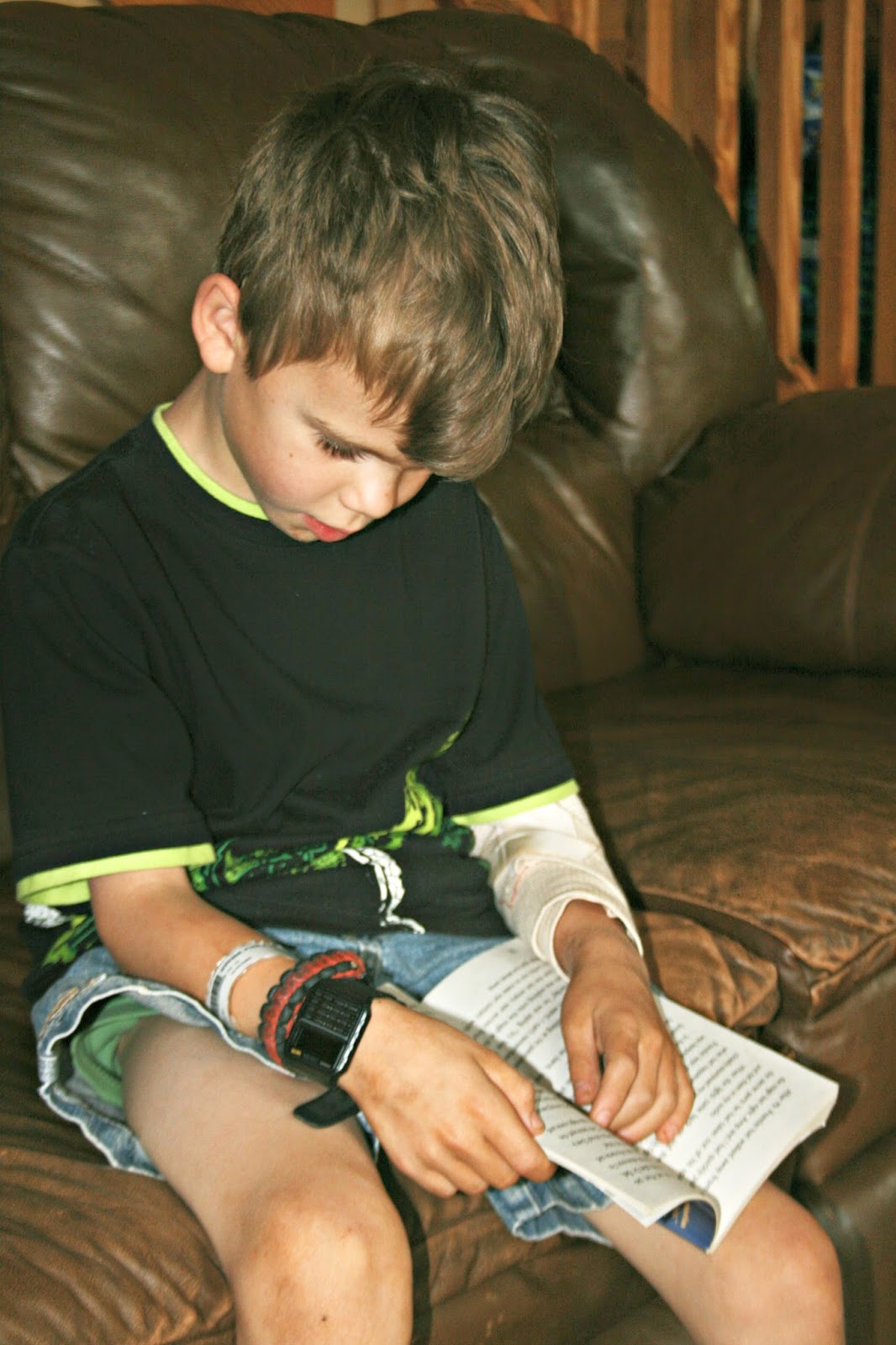 The pin was still holding the bone well enough to leave it in.  Pierce got a clean cast and we headed home for another 10 days.  We tried to keep him quiet.  He was certainly bummed not to be swimming or riding his bike.

At the next appointment, x-rays showed the bone was 80% healed.  Pierce was getting sores on his arm from the cast, so they decided to remove the pins and the cast.  The pin removal hurt somewhat, but Pierce did a great job taking deep breaths.  Pierce's arm still had some swelling, but looked good overall.

Now, Pierce has gauze and an ace bandage.  He is learning how to move his arm again.  We go back in a few days to see how his range of motion is doing.  He's been quite the trooper, but I know he'll be happy when he's cleared for bike riding again!

In the meantime, Pierce received tons of support from friends and family.  He got many get well cards and even a couple of fun activities and books to keep him busy while he was laying low.  News traveled through the grapevine, and he got cards from three former teachers and his principal!  His first grade teacher invited us to meet her for lunch last week, and it made Pierce so happy to see her.  It warmed my heart (and Pierce's) to see so many people caring about my little boy, and taking a few moments from their day to send him get well wishes.  What could make a kid feel better than that?

Congratulations to Pierce for his cast and pin removal; fingers crossed here for quick full recovery so bikes and pools can be attended too :-). And what a super community you have around you, imagine his Grade One teacher inviting Pierce and you to lunch, how fabulous!

Whew, quite an ordeal. Great job Pierce dealing with it! Something to look back on and be proud of handling it so well.

I figured that he would handle it well, not a fun thing for sure but once he gets the arm working again it will quickly become a memory of the summer that he broke his arm.

I hope it won't be long until Pierce can ride his bike! How thoughtful of his former teacher! Hope you guys have a good day.

Oh good job Pierce, (and Momma!)I'm so glad people shared caring and encouragement with him.

Oh Pierce you are a brave boy and you will be back on that bike in no time at all now. 80% is getting there. Hug B

Glad Pierce is healing so well. I think ice cream, home made of course, would make him feel excellent!

WOW! That was sure nice to have everyone care so much! He'll be back to normal in no time. That stiffness from the cast goes away pretty quickly. They leave them on for a shorter time now than we were kids.

Sounds like Pierce is a brave boy. The world needs more teachers like that one. What a wonderful thing for her to do.

Being able to see the pin had to be scary! I am glad he has the cast off.

Hooray for this good news! I'm glad he's at the end of the mend...my middle son broke his arm last week and I just learned minutes ago he won't need surgery. Praise God!
Hope your guy gets to really enjoy a great summer now with his full range of motion!

I love that he has such a vast support system. I hope he is fully healed soon!

Oops! Bear has been out of the loop since the end of May, and is now just learning of Pierce's misadventure. Poor boy! Even a Bear know that breaking your humerus is not humours!

Glad that he's coming along so well, despite the GGRRR! of the whole thing.

Glad to hear he's healing well! I'm sure he's much more comfortable with this pins out!

Bless his heart! That's a lot for a little boy to go through. I'm so glad it's beginning to heal that much, and the ace bandage I'm sure feels better than the cast!

Hugs and kisses for Pierce.
xoxo

I'm glad Pierce get better. I hope the recovery will be faster. My nephew and my mother also had the same experience. They ate chicken wings and legs to treat the broken bones. Both of chicken's leg and wing works like as glue to make the broken bones get stronger. And it was work.

Sweet boy- I am so glad the cast and pins are off and out- I can't imagine the pain. Hopefully he will be riding his bike soon!

so glad he's doing well - the pin would have scared me, too!

you have some wonderful, caring teachers there. :)

Bless his little heart! I'm so glad to hear that he is healing well. He sure is brave! I hope he will be back on the bike soon.

I would have totally freaked out at seeing the pin sticking out. So glad things are healing nicely. Must be a total bummer to be missing out on summer fun with a broken humerus... poor kid.

Aww, he has been through a lot. And the pain from the pin incident is just sad. Did he ever need pain meds?

Poor little guy?.he wants to jump on that bike so badly and swim!!!...:)JP

oh i am so sorry to hear about that broken arm, but glad that he is doing so well and improving. Thank goodness they got that pin out and that he did not get any infection in his bone from it sticking out like that.

Glad to hear that he is healing. I know seeing the pin was scary!

Alls well that end well. And a good job for Pierce on a tough break....

It's good the little guy has so many friends, and such good parents. All boys have to go through some trauma or other, it's just how life is but that doesn't make it any easier on anyone.

I'm so sorry to hear about his broken arm! I would have freaked if I seen the pin sticking out like that! I'm so glad that he is getting better. Hope he gets a good report at his next visit so he can ride that bike because boys love to ride their bikes! Mine would really be upset if he couldn't ride his.

Pierce is brave! I'm glad he's being celebrated by people who care.

My brother, who has a birthday this week is almost 20 years older than me. When he was Pierce's age he suffered a broken arm during a swing accident. It is the warmest of surprises when people show their caring and concern, and we're reminded how much we mean to others. I hope Pierce heals well and is back to 100% in no time. He sounds like a brave young man!

Good to hear all is healing as it should! and it must be very difficult for an active young boy to stay quiet and careful, especially in the summer months, good job Pierce and Mom!

Aww, poor guy! That is awesome that he has so many people reaching out. Hoping it's back to 100% soon!

That just sounds painful!!! That's sad that he can't do any of the boy fun things for the summer like swimming and being outdoors with his brothers. I'm thinking of him!

He really is a trooper! I hope he's all healed up very soon!!

Hi There, Just stopping by to say "Happy 4th of July".... Hope you have an incredible weekend whether you are traveling, with family or friends --or like us, just enjoying being home! We hope to grill a couple of steaks tomorrow. Our weather here is awesome right now...God Bless American --and God Bless YOU.

Bless Pierce's heart... I'm sorry it has been so rough for him --but he's obviously been a real trooper throughout all of this ordeal. Hope he will be able to do some of the things he wants to do soon.

Whew, I didn't realize the healing process could be so complicated. I would have freaked out to see the pin coming out of his cast too! Thankfully, it sounds like your little guy is on the mend. Congrats to him for being such a brave boy!

The poor thing. I suppose it's common in kids, though, as your healthcare peeps seem to know what they are doing! How frustrating for him, though!

i was just looking at my old blog and saw your kind comment about losing my nugget a couple of years ago so i thought i would jump over to see what you have been up to... regarding your son and that awful pin... i cannot believe the pain he had to go through at such a young age... so glad he is healing nicely. saw that possum pic on your banner... wondering what the story about that was? so cute! my sister feeds a possum who hides each evening on her porch.

Hi Lisa,
I visit you this day,go through your wonderful posts, and see your news about your beautiful boy...
I send Healing Prayers for your little boy, Pierce.
I pray for his complete healings and prompt recovery.
Get well soon, Pierce!
God makes miracles at a single touch. I believe in the power of prayers. God listens to our prayers. Believe me!!...
Your little boy is so brave.
God bless his heart, Lisa,
and all your dear family.
I've been going through health issues, unable to do computer work, and spending time with my hubby who is on vacation. He will soon RETIRE,and STAY HOME often.
Then, it'll be hard for me to keep up with my writings at that point.
Anyway, I wish you all the Best.
Hope, Peace & Love,
Starry.

Hi Lisa,
I pray for Pierce complete healings
and prompt recovery.
God listens to our prayers.
Have a blessed Summer, Lisa with your dear family and beloved ones!
Hope, Peace & Love,
Starry.
P.S.: I left another comment in this post, but I don't see it. Maybe, it's my computer...