Paul and I have wanted to go to Medieval Times for over twenty years - since we first heard tales of the one in Dallas when we were in college.  The cost always put us off.  The day the twins turned 5, we were spending the day in Myrtle Beach, and we finally decided it was the perfect time to have a big splurge and take the family.  After all, the boys and I had spent the whole summer studying the Middle Ages and the Renaissance.  With all this fresh in their minds, we wanted to experience the time period first hand. 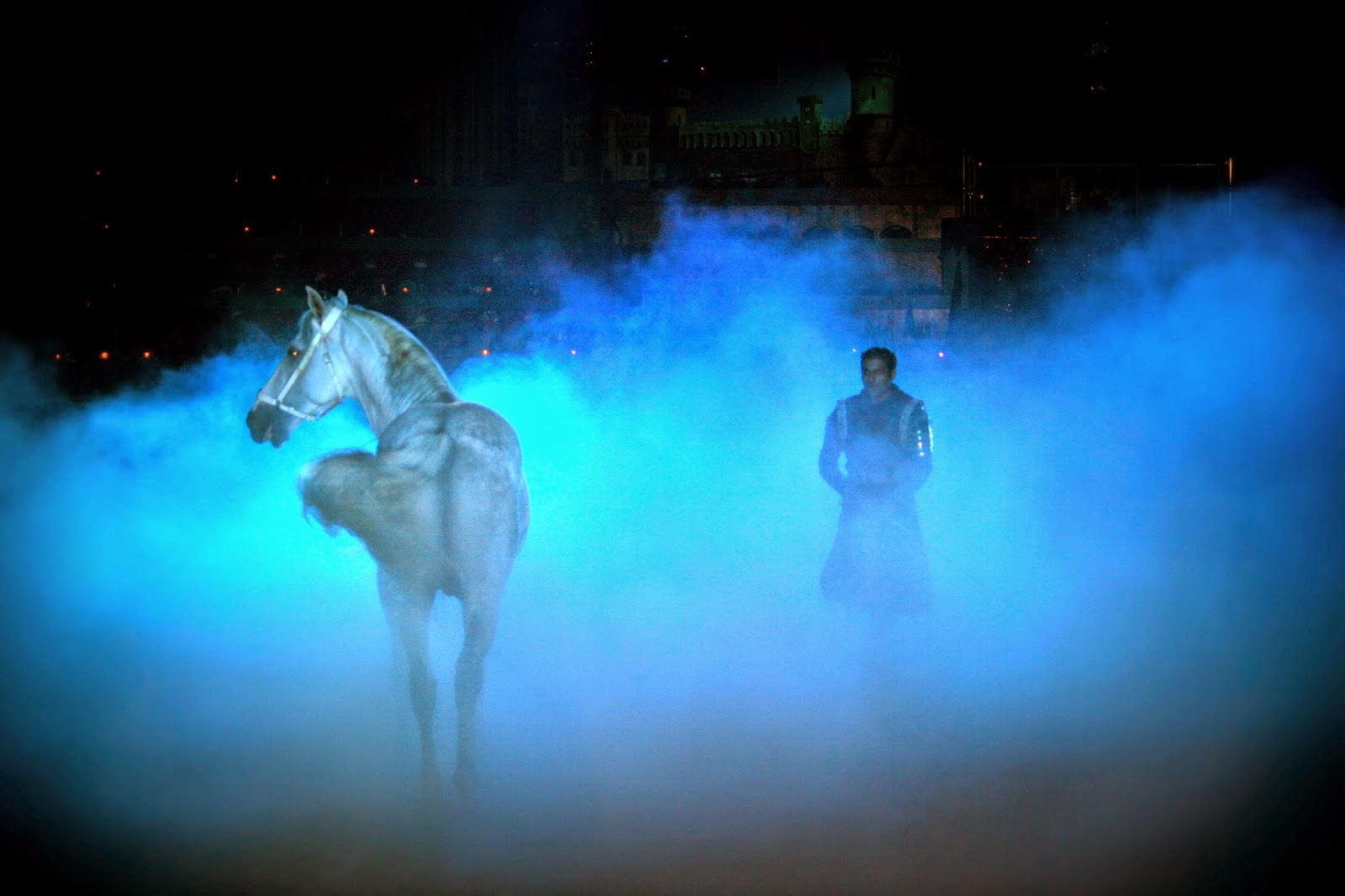 From the moment we sat down at our tables, we were enchanted.  There were no eating utensils - pewter cups, plates and bowls were it.  Our waiter was a squire, who told us a bit about what to expect. 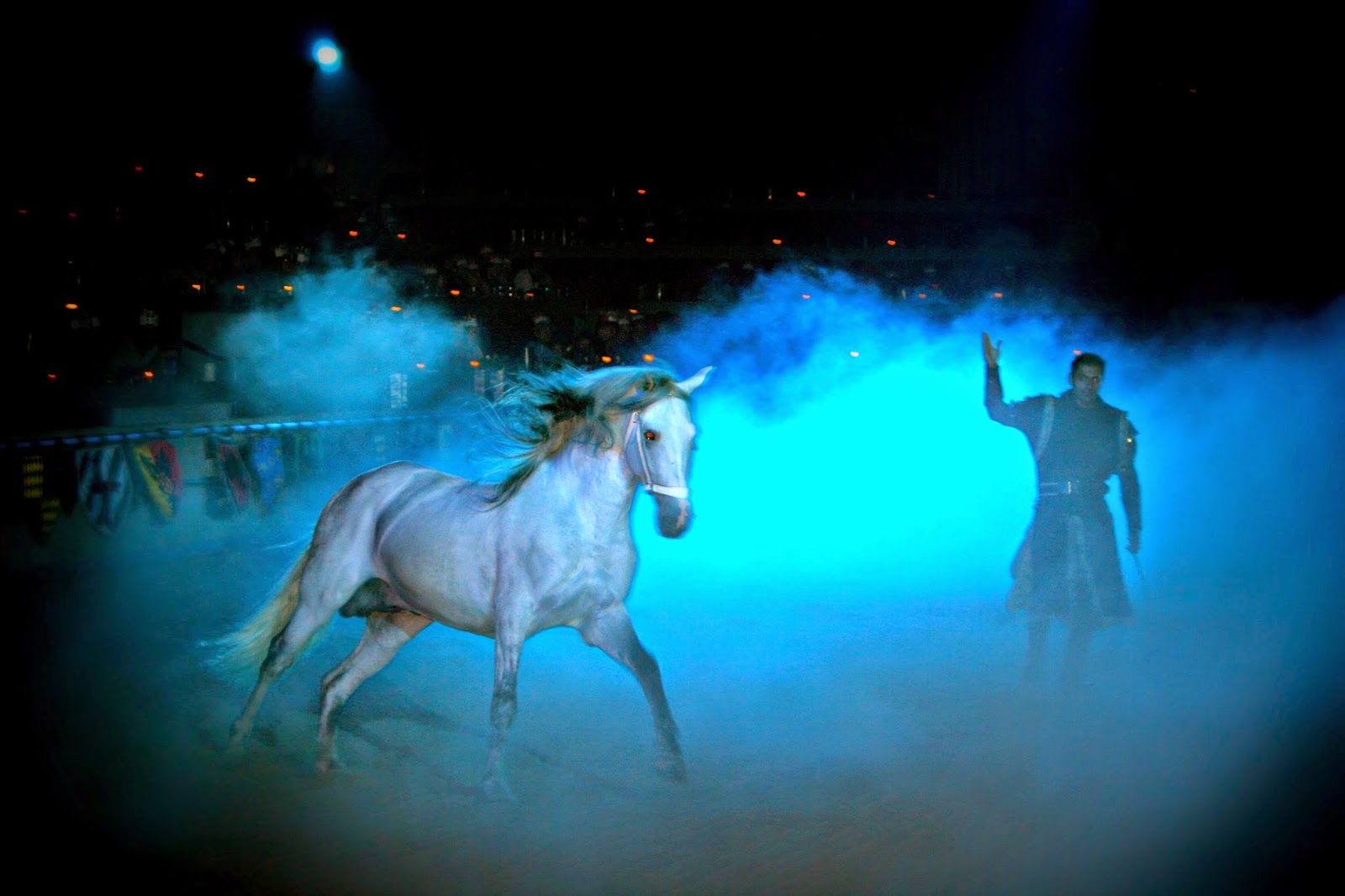 The first course was a tomato bisque (which you had to drink from your bowl, since there were no spoons), followed by a garlic bread. 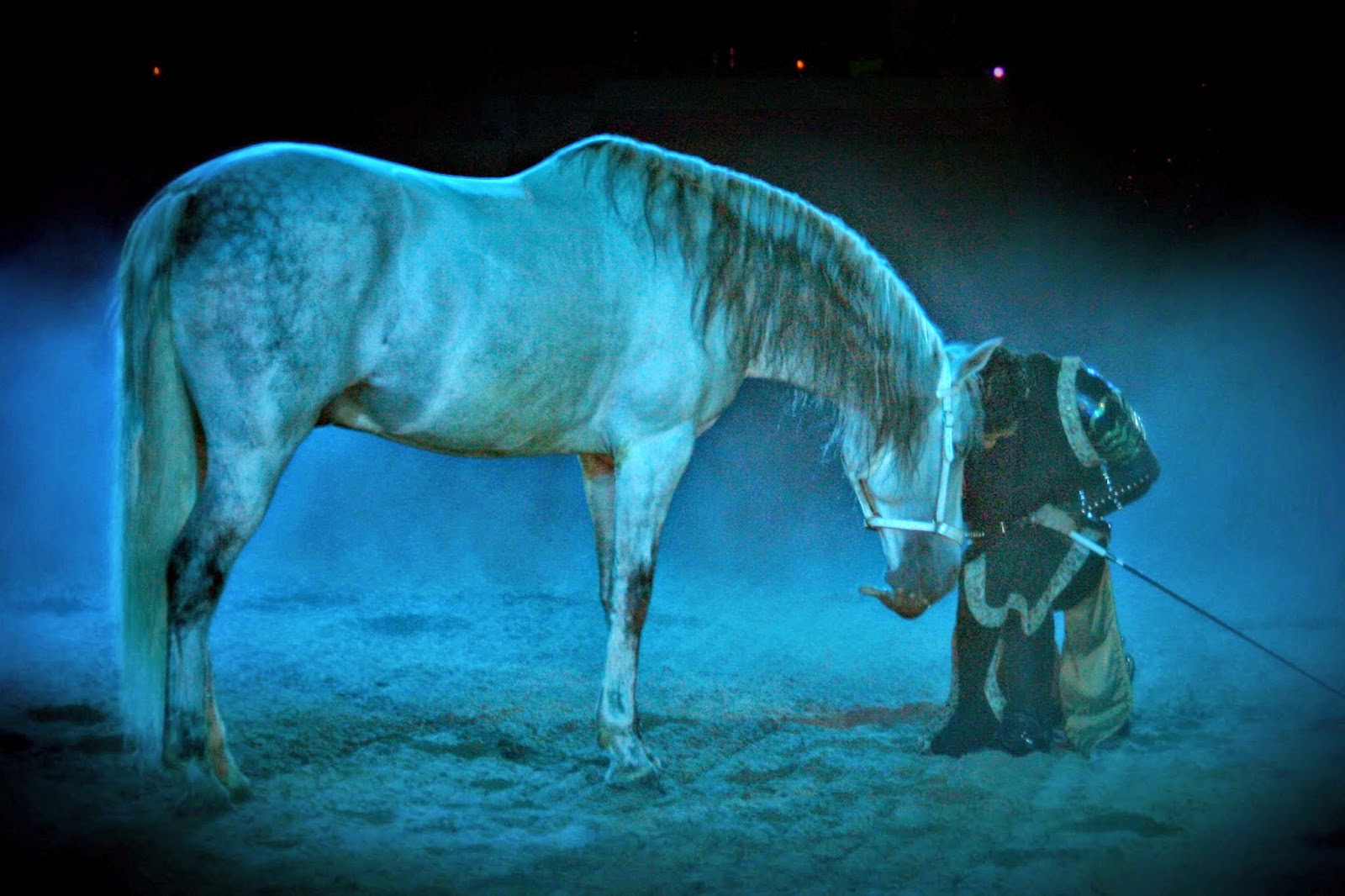 Meanwhile, I couldn't take my eyes off these gorgeous horses.  Why can't every meal involve such entertainment?  They really knew how to have a feast back in the day! 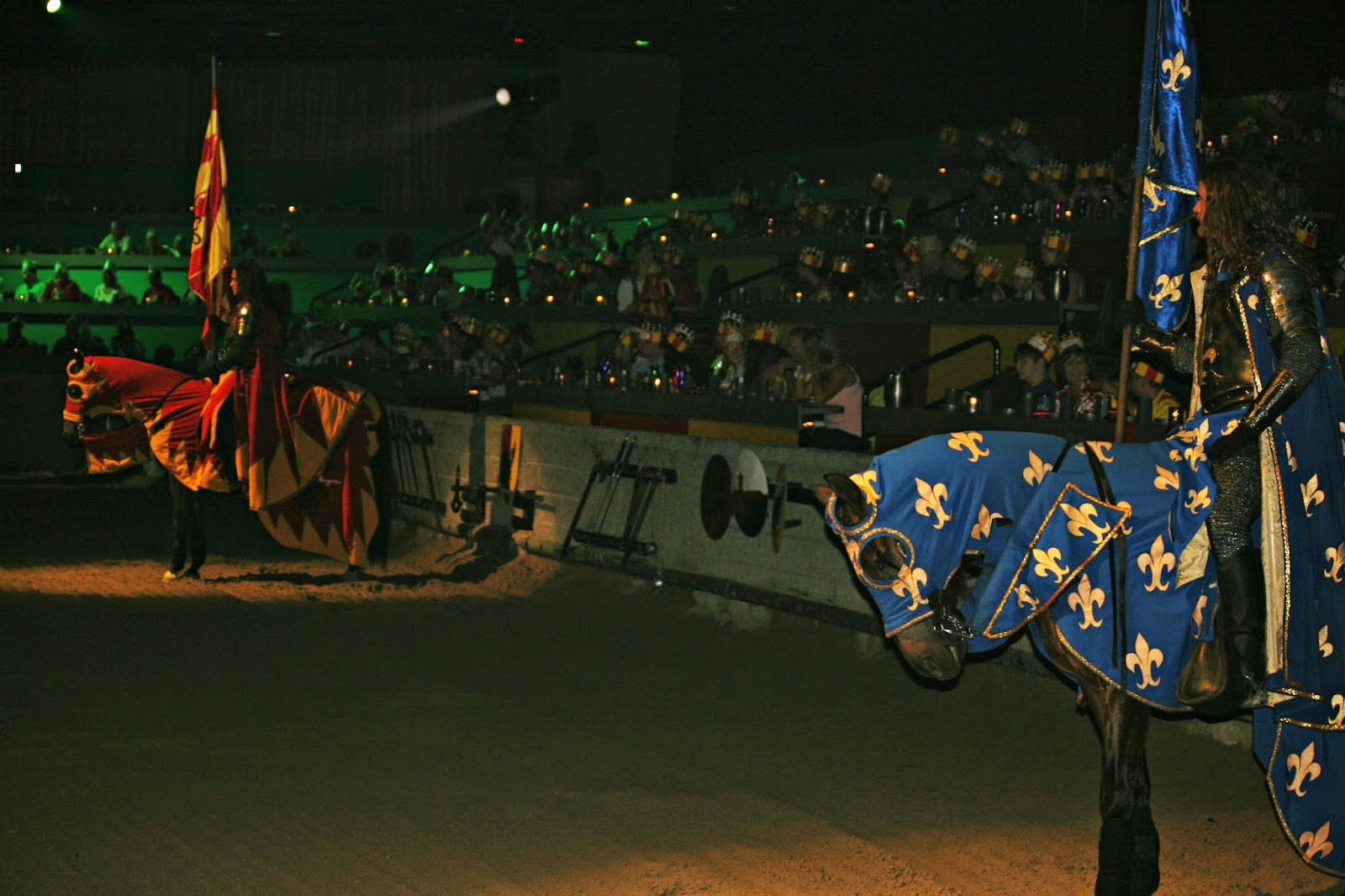 We were in the section for the blue knight, so we were to cheer for him, and boo all the others.  Cort really got into the drink toasts, and all evening kept wanting to click glasses. 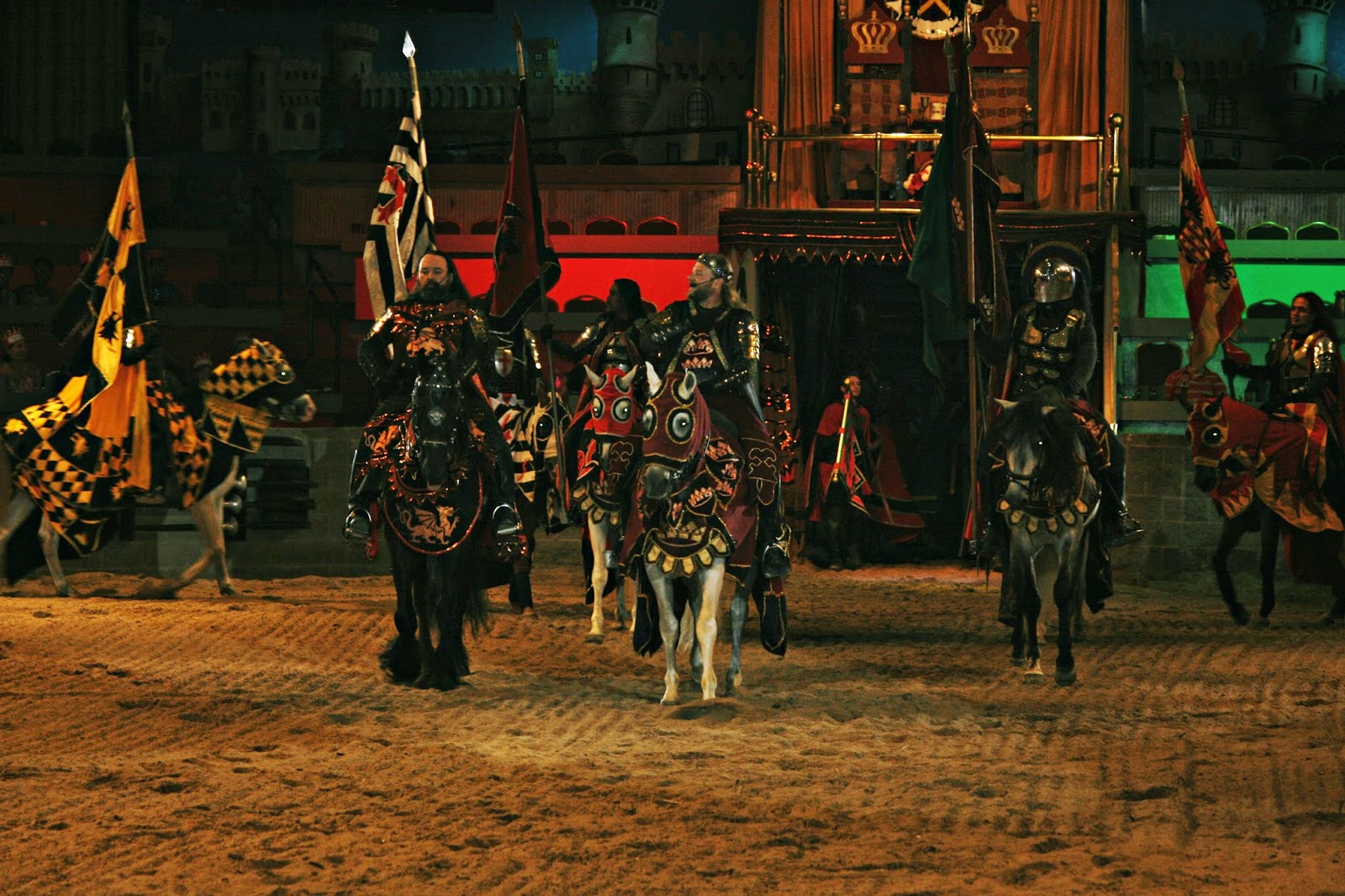 Our next course was half a roasted chicken - we were served a lot of food!  Eating chicken with your fingers was interesting.  After that, a roasted potato and bbq ribs followed.  I missed having something green, but understood that this was in keeping with the Middle Ages.  Dessert was an apple puff pastry.

The food was all very tasty.  The king and queen were gracious and their speech and behavior was in keeping with the day. 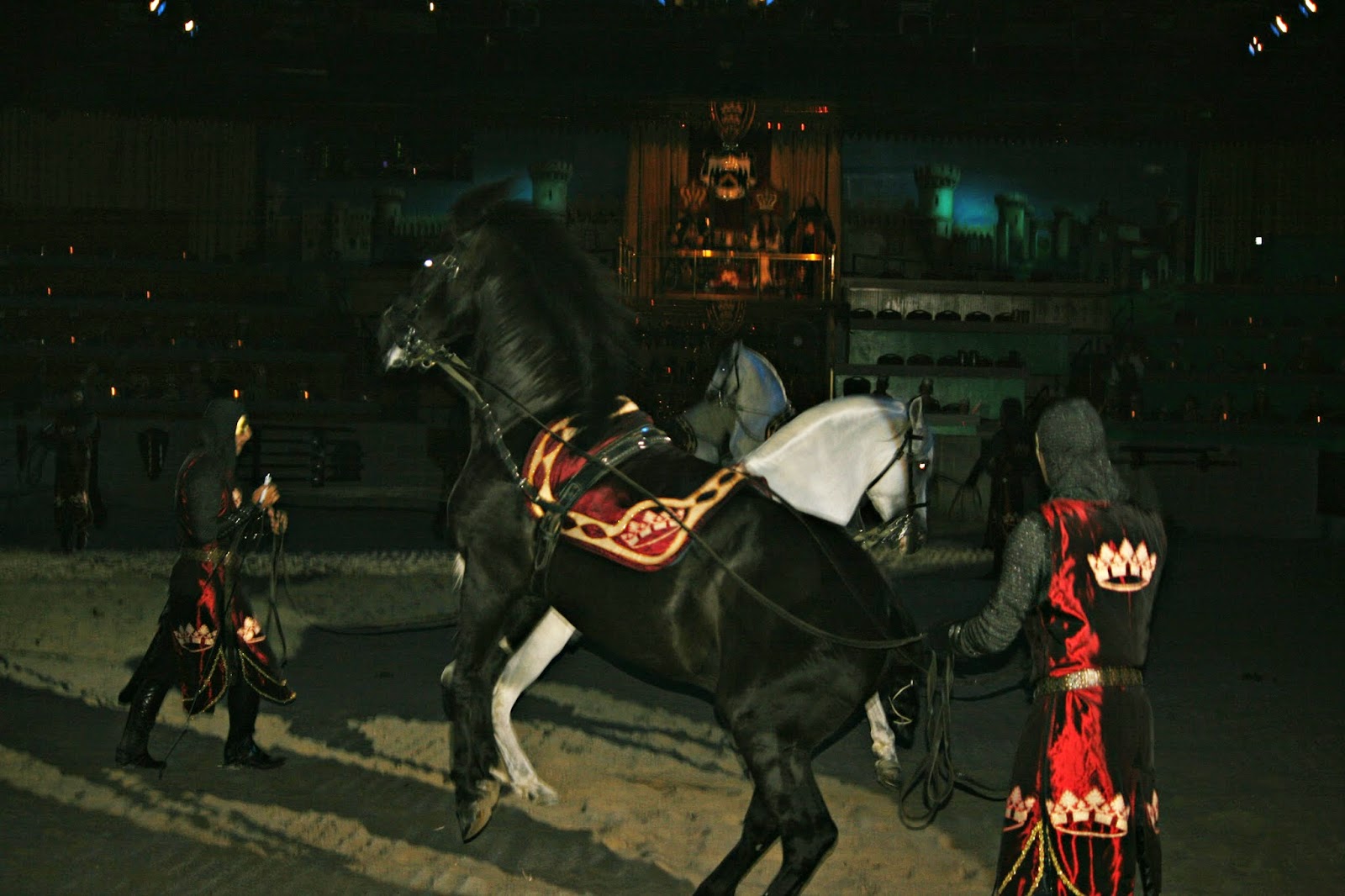 The horses showed off with a few airs above the ground. 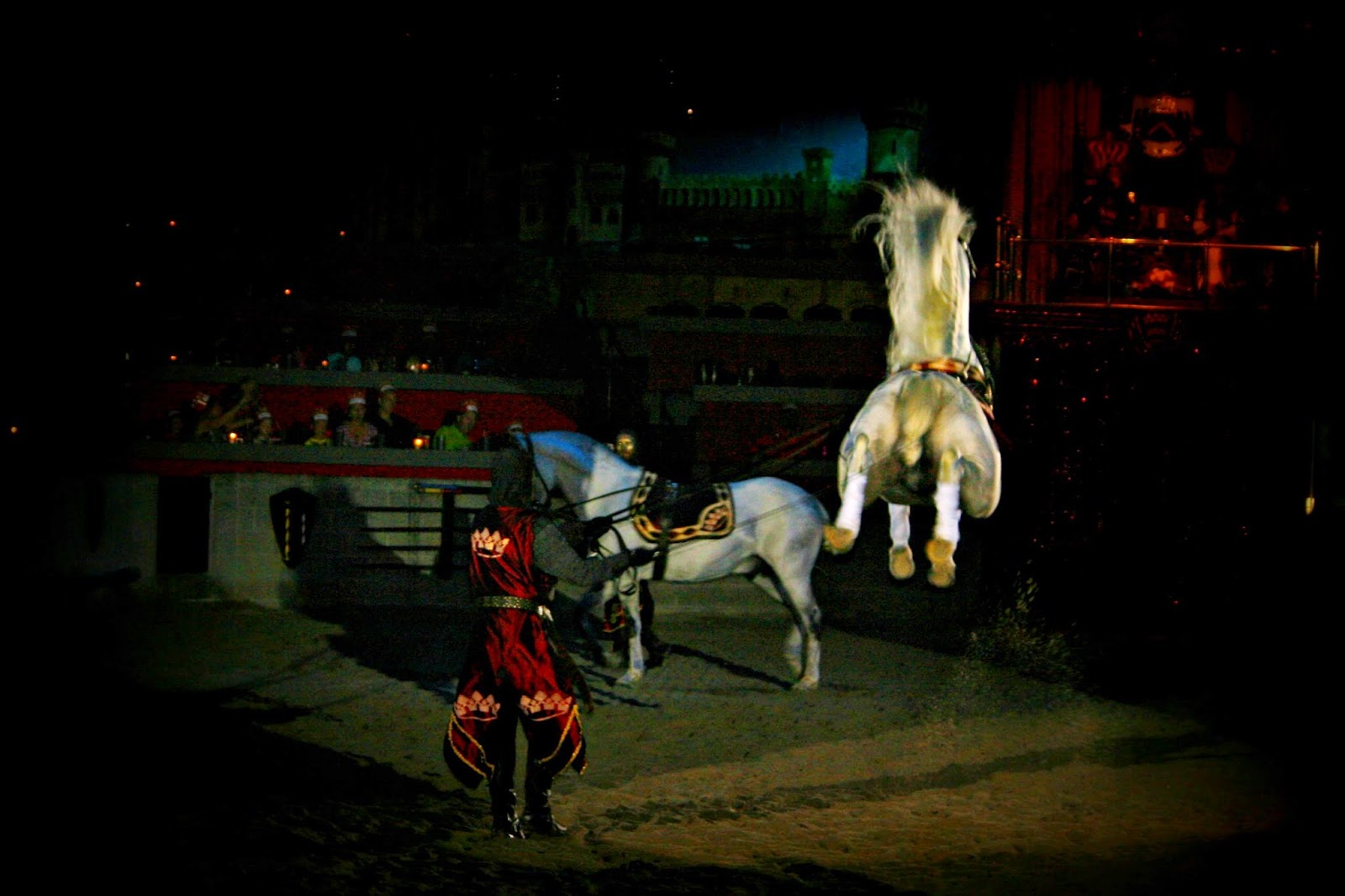 And then the falconer came out.  As the falcon soared over our heads while we ate our food, the entire thing felt surreal.﻿ 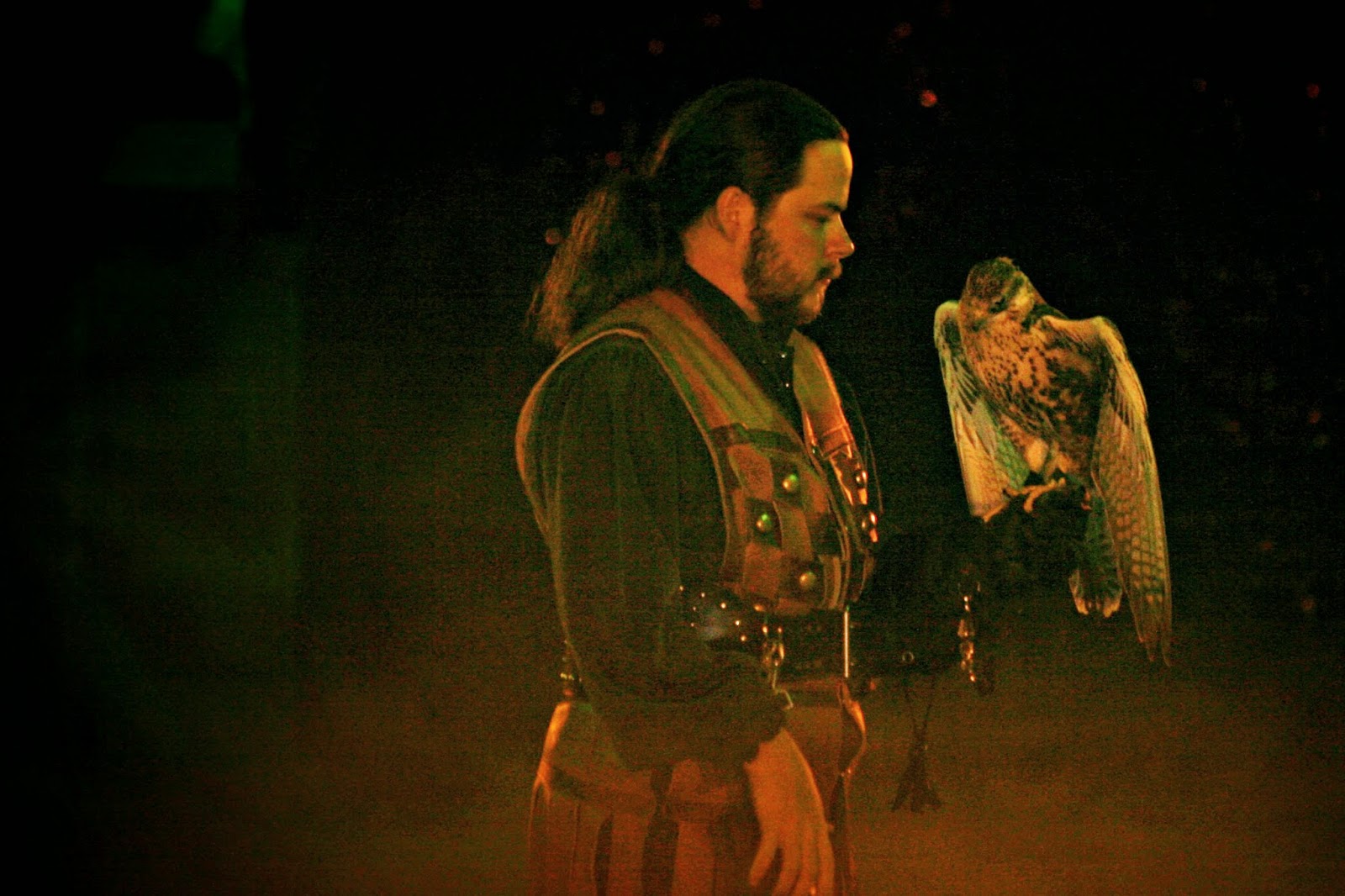 The king was quite impressed with his falconer, and thanked him graciously.﻿ 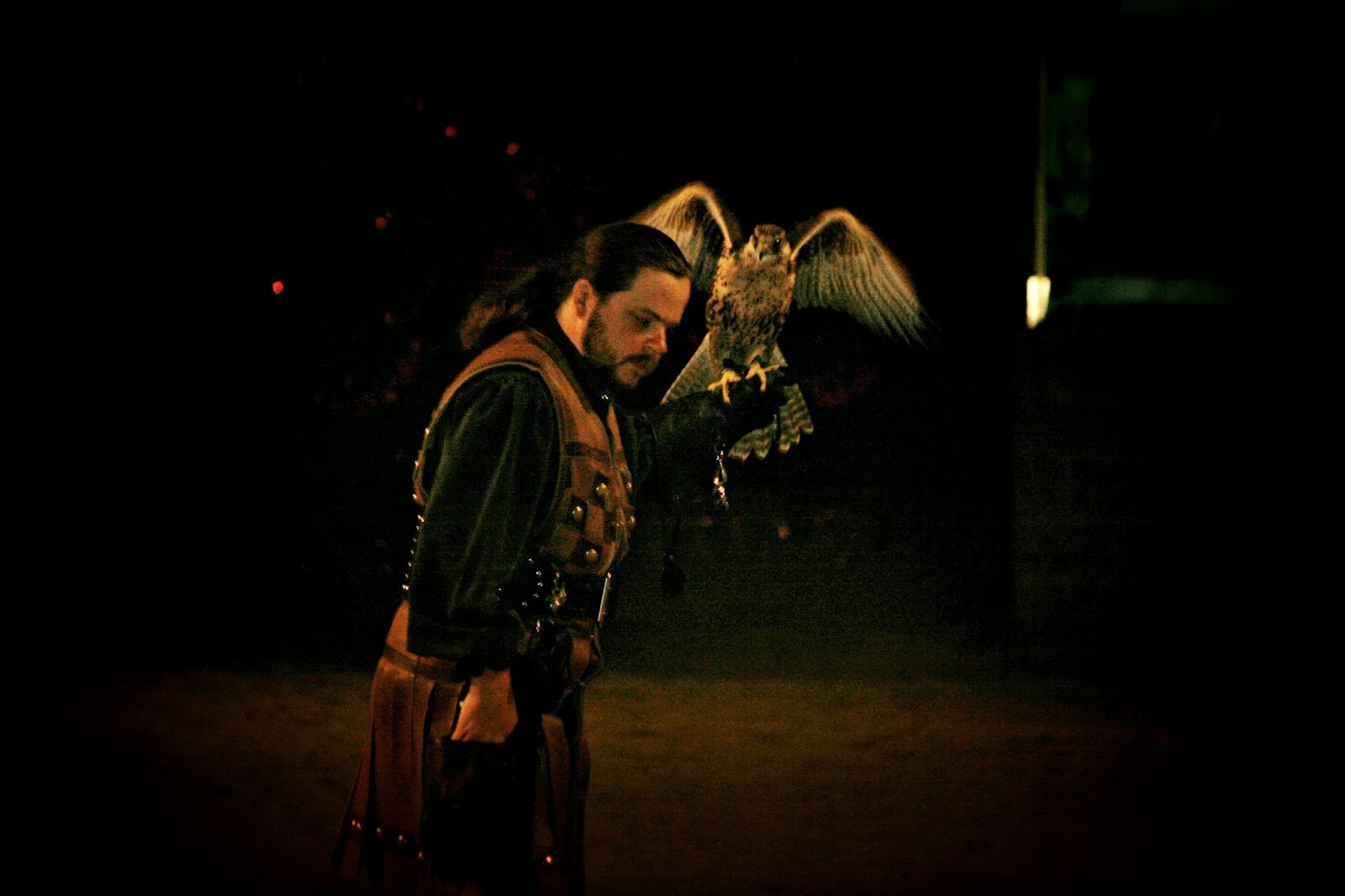 There was much sport after that.
Relay races and the like.
We had fantastic seats - bottom row on the end.  So I was in a prime spot for photos. 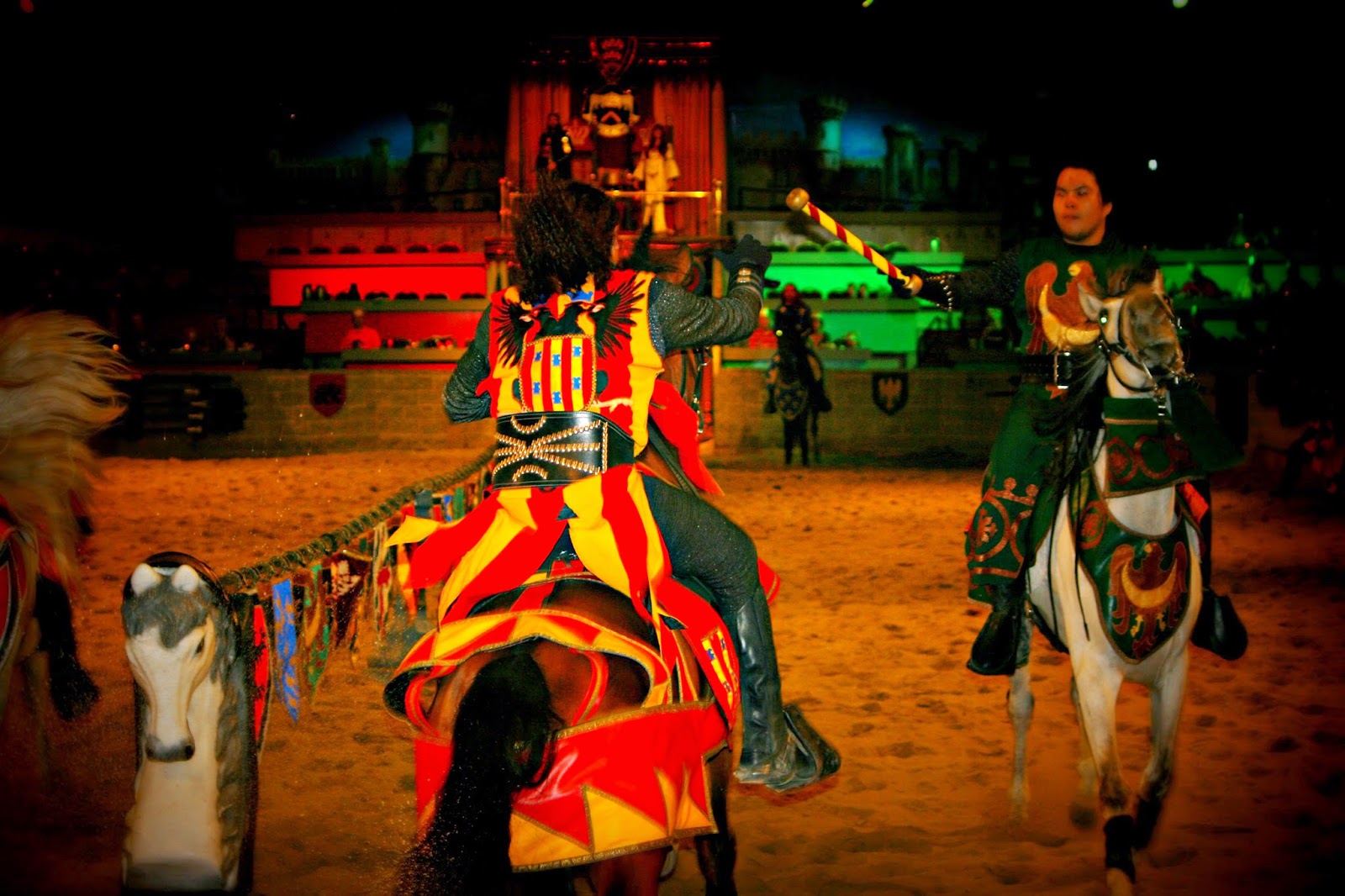 The boys were all very impressed with all the jousting.﻿ 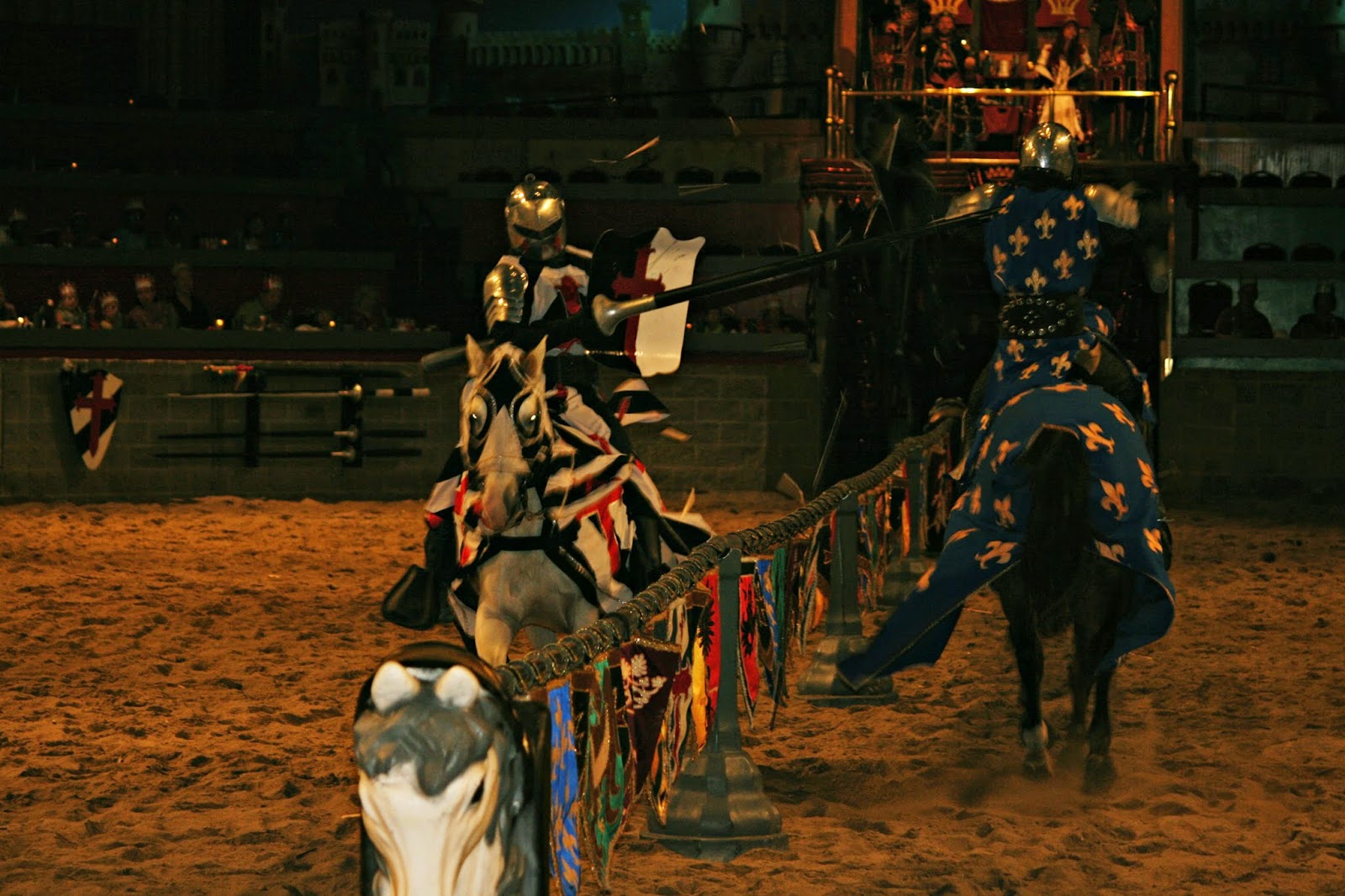 And when one knight got knocked off, he'd get up and continue the battle on foot.﻿ 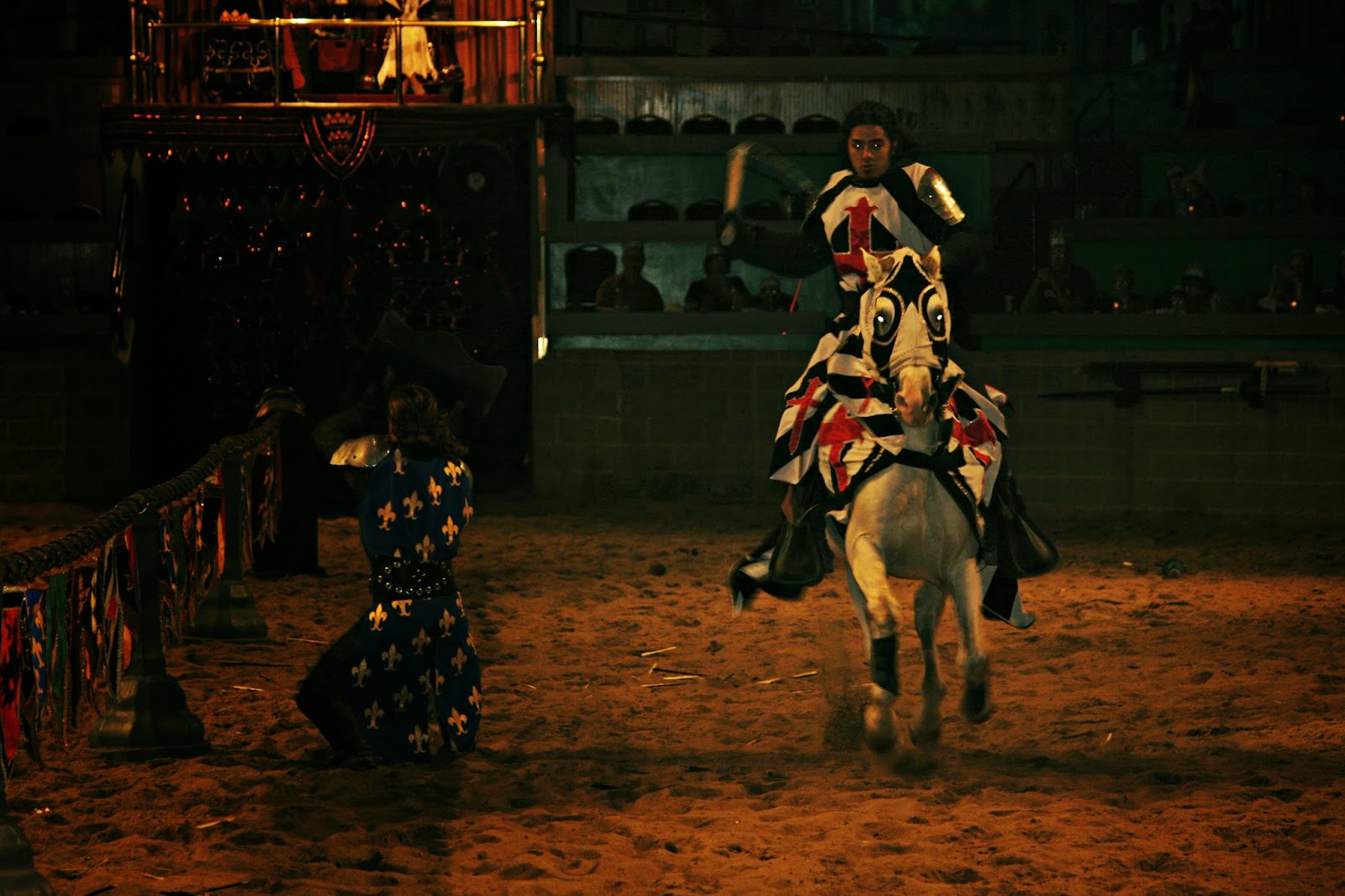 Sometimes a sword fight was the only way to settle the matter.﻿ 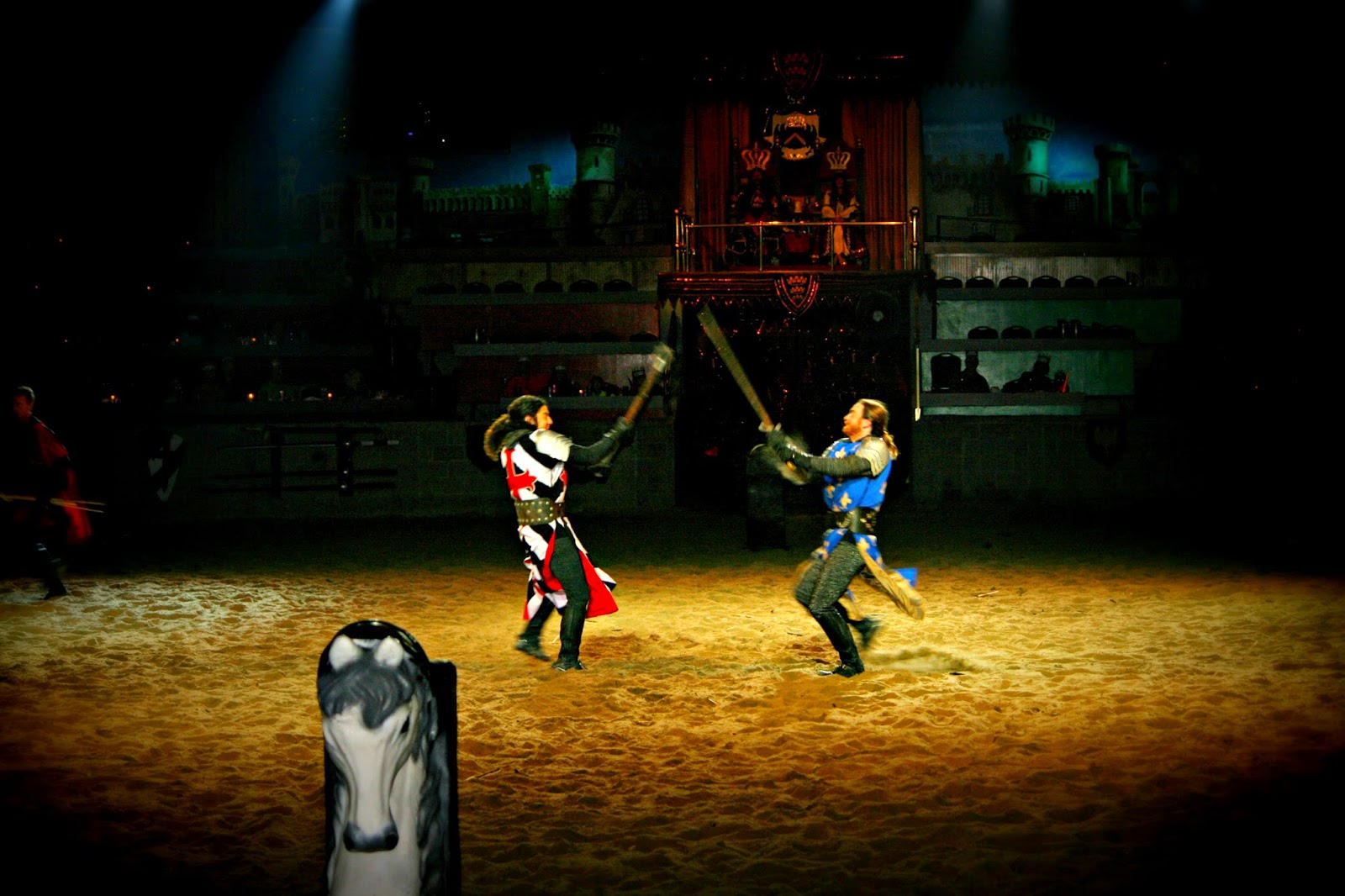 I have to say - Paul and I decided after the show that it was worth every single penny.
One of the most fun dinners we have ever had.
As for the boys - they are still asking if the 'bad guy' is still locked up in the dungeon.
And - they want to know when we can go eat in a castle again.
If it were up to me, we'd dine in castles every night of the week!﻿

It sounds like a great time. I can't help thinking of the movie 'Monty Python and the Holy Grail' whenever I think of that place though...

What fun! I have heard about this place, but have never been to feast before.

It looks wonderful! AND.. it looks like the exact same stadium where years ago I took my children to see Dolly Parton's Dixie Stampede! What a fun arena! we were served dinner there while watching the show.

I have never heard of that, looks really neat especially for the kids, and big kids to I guess. We should start one around here, we have the horses and plenty of serfs.

how fun! i've always wanted to do that too. we saw dixie stampede in branson, along the same lines, we had so much fun! great photos!

I've heard of those. And it looks like a lot of fun!

That is truly awesome, Lisa and something you all will remember for a very long time. So happy that you and Paul decided "let's just do it". Happy parents and boys. :)

Incredible experience! You and Paul are great at providing quality educational experiences for your children.

This is the stuff dreams are made of . . . Did you return home and decide you no longer needed forks at the table???

Thank you for taking us with you.
-g-

i've been a couple of times. with kids, it is easy to enjoy. i tell folks, you have to go and get in the spirit of things. if you sit there expecting a fine meal and think about how stupid this whole reenactment thing is, you're going to hate it. if you go to have fun, to cheer loudly for 'your side', to laugh at corny stuff and admire beautiful horses, then you'll love it.

Sounds wonderful! I love the costumes. The eating arrangements sound like Dixie Stampede in Pigeon Forge. I think I would enjoy Medieval better.

I think you and Paul need to build the boys a castle. :-)

This brings back many memories! Just about every time family visited us in FL this is one of the places to see. We also had the Dolly Pardon show and the Pirates dinner. :)

Wow, I am totally impressed by your pictures! You got great ones even though it must have been pretty dark. And the meal sounds very good. I love the horse in mid-air! And none of your action shots are blurry!! Now, where is this place, if it is not too far I want to go!!

I saw this on an episode of "Walker, Texas Ranger" but I had absolutely no idea it actually existed in the real world til I saw your post. Looks to me like it would be a lot of fun, indeed.

Great pictures and it looks like you ALL had a great time there. The closest thing I have ever come to that kind of dinner was Dolly Parton's Dixie Stampede in Pigeon Forge/Sevierville. BUT--it wasn't nearly as 'classy' as yours... Glad you went!!!

How fun! I used to pass by the one in Dallas quite frequently but never went. Your boys must've loved it!

That looks wonderful, in the "full of wonder" sense!

I've heard about Medieval Times, but never went there. What a treasure trove of memories the boys will have all their lives because Mom and Dad took them to "cool places"! Those memories will be priceless!!

What a fabulous adventure! You photographed it beautifully! I LOVE those horses. I've been a horse lover my whole life.

I need to add this to my bucket list! I think some of my daughters have been to one in Vegas. What I want to know is how did you get the boys to eat anything with all that going on?

I have been to Medieval Times twice, but it has been a long time. I am sure our kids would really enjoy it--thanks for the reminder.

Oh my goodness...I went to Medieval Times back in college. You just brought back some wonderful memories! We have one up in Boston. I think it's time for another road trip!

What a wonderful experience for your kiddos!

I want to go. This looks so amazing! Glad you got to go there with the fam. :)

We went there last year with our 10-year old.

But it is in a forlorn area of the "beach" with the old Wacammaw Pottery factory outlets, and a little amusement park shut down. If I remember only two of the theaters (Medieval Times being one of them) have survived the downturn: unless you count the one that was turned into a church.

I am glad you had fun. If you ever want to do something non-beach like, the little zoo is nice. More than you would expect from a small private zoo.