Can you believe that today marks a year since I went and rescued Francie?  The scrawny horse that was so weak yet untamed and unhandled, infested with the worst case of strongyles my vet had ever seen, has come such a long way.

Here are a couple of pictures of her from the first week with us.  She was covered in muck, which I couldn't brush off because her skin was overly sensitive to touch and she wasn't used to being handled.  She had never had her feet trimmed.  She was underweight to the point that her spine protruded, and had three different types of parasites. 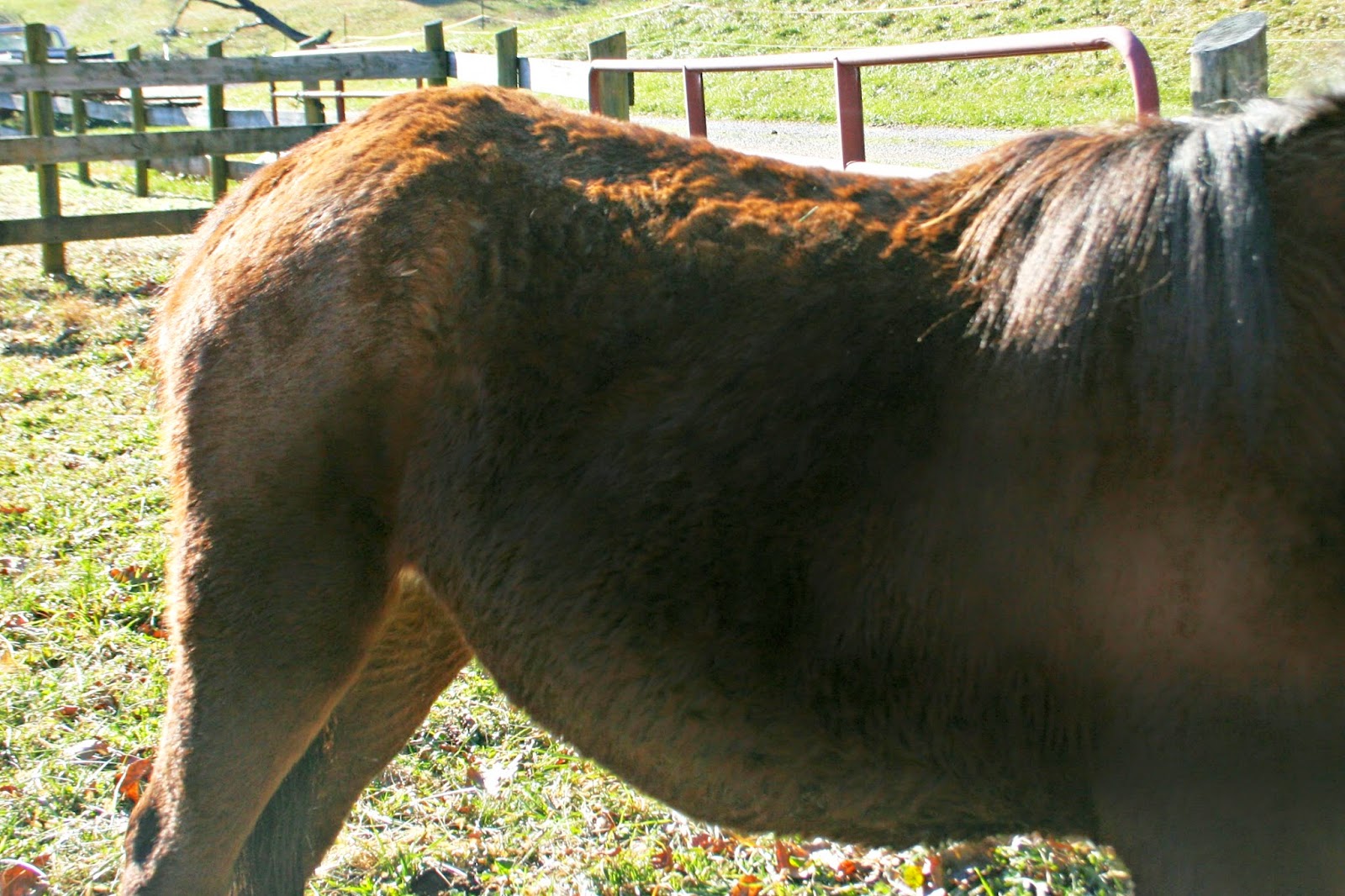 In this picture, you can see the muck that was on her legs, that I was unable to curry off being of her skin sensitivities.  She had been standing and sleeping in this muck. 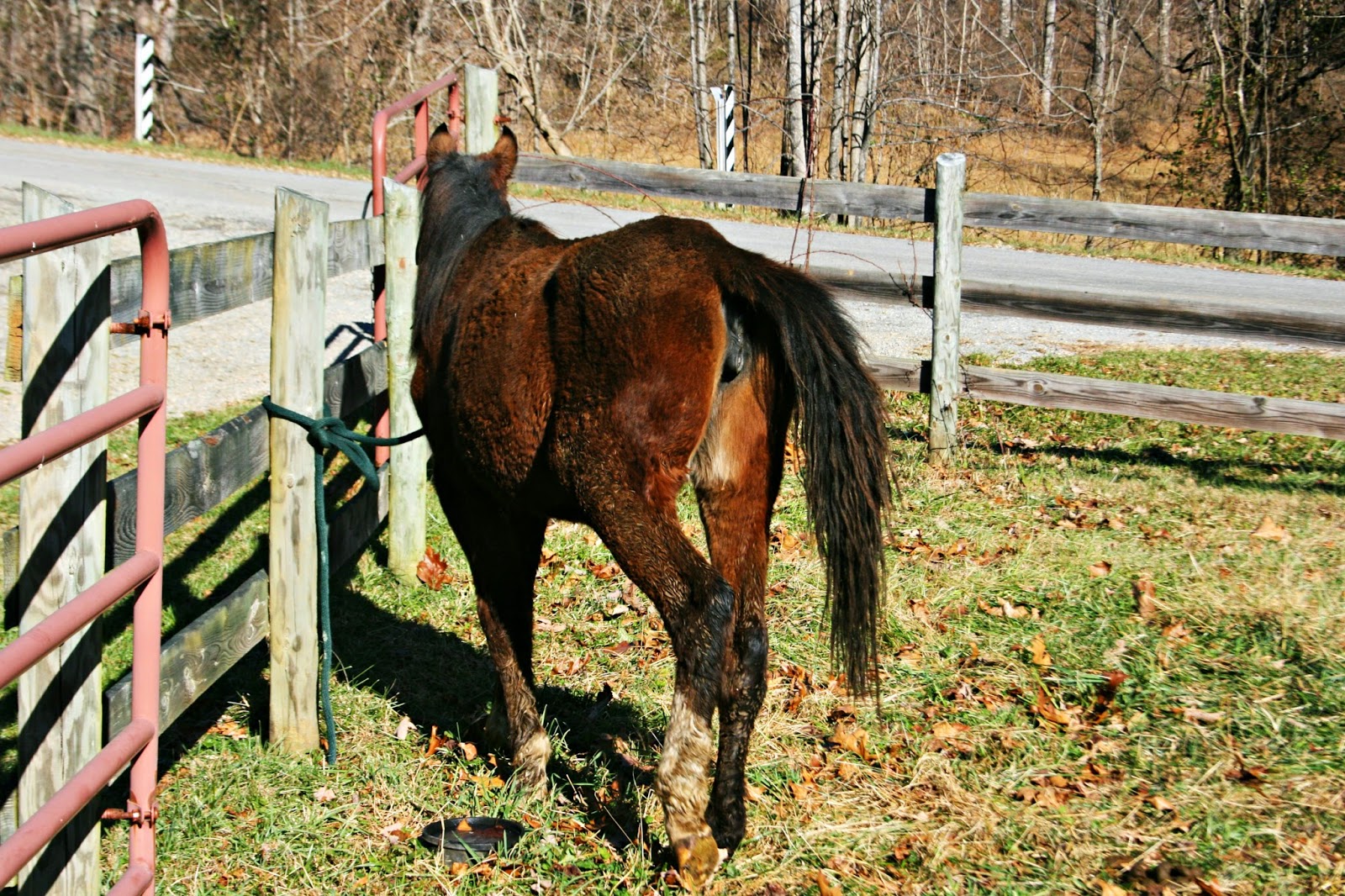 Note how skinny her neck is in this picture.  You can really see a difference in her neck in more recent photos. 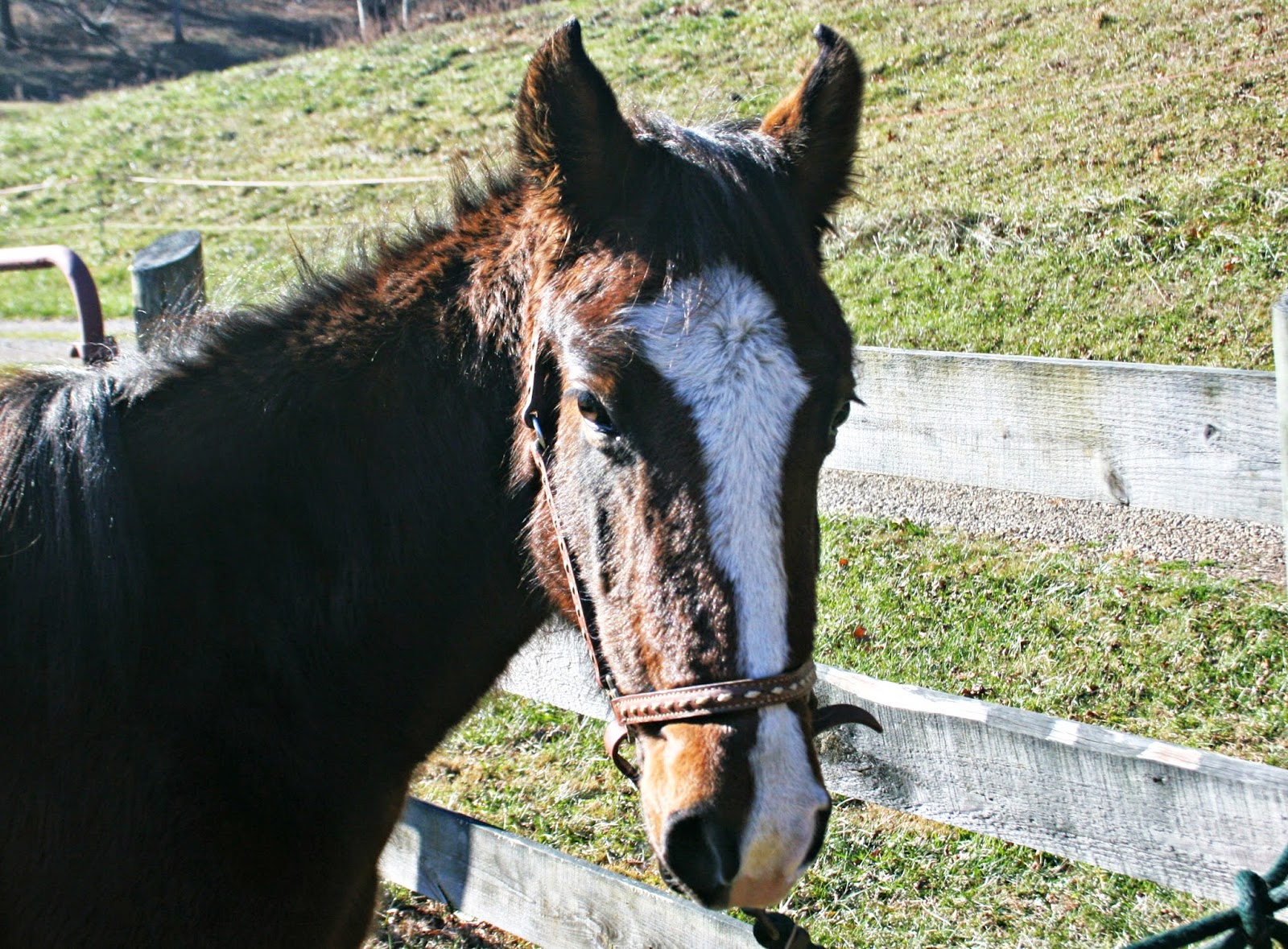 Alright, now here are some pictures of Francie from this past week.  You can see the muck is gone and she has totally filled out.  Her coat is so much healthier, and she is parasite-free. 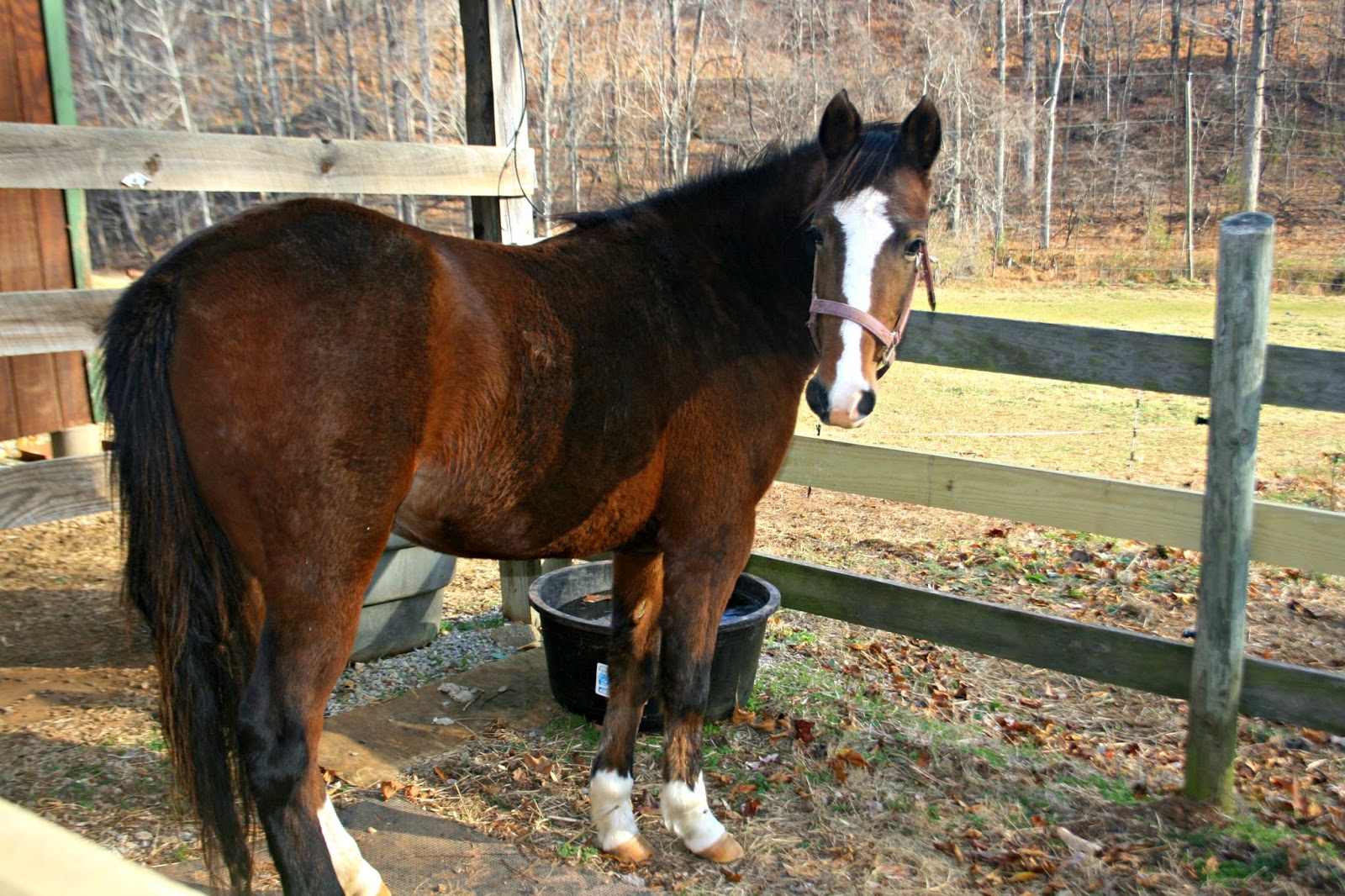 She has had regular trimmings by the farrier and even sometimes lifts her feet for him when he comes.  Today she loves to be brushed, especially around her neck area.  Look how much thicker her neck is now! 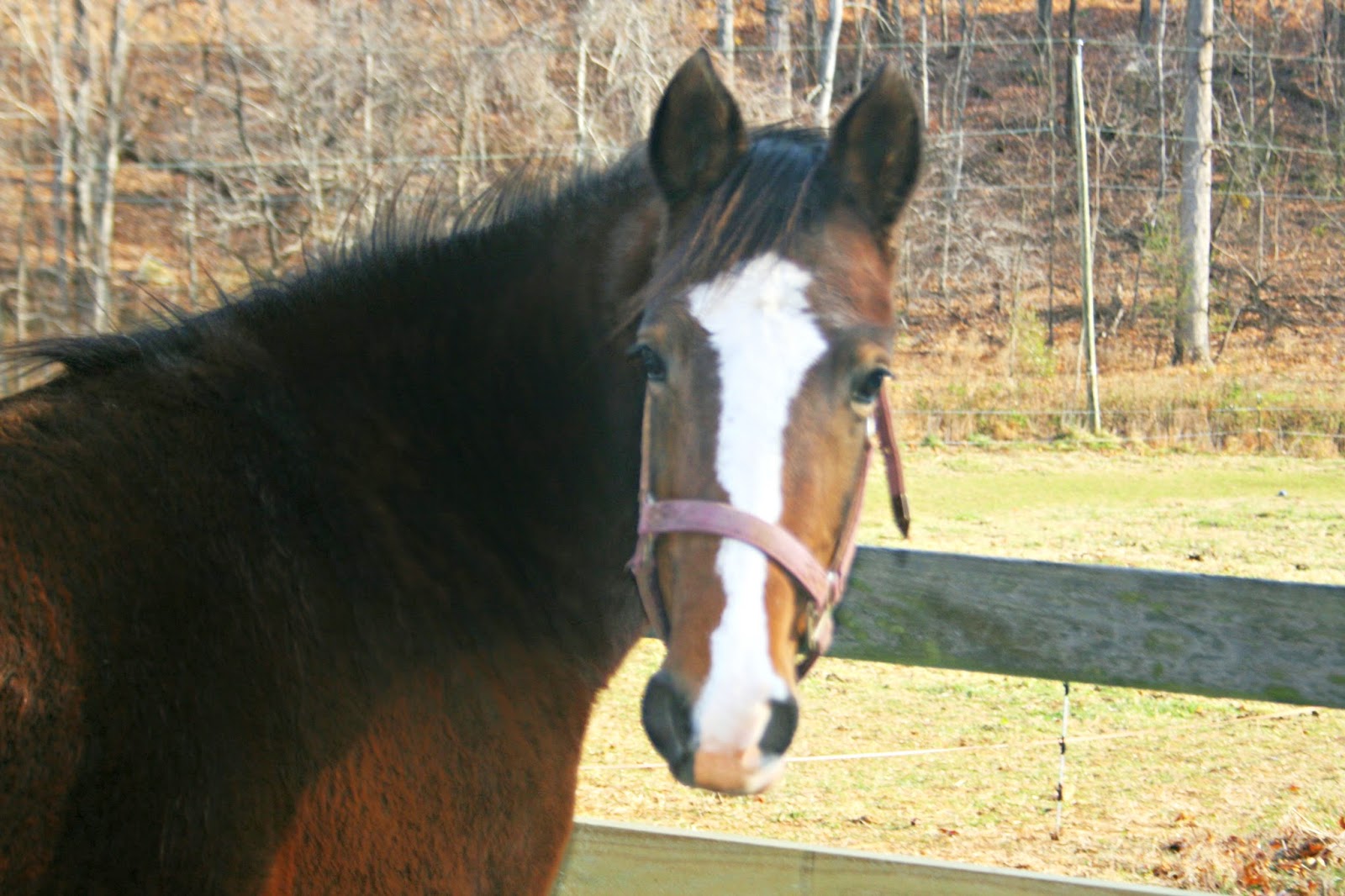 Look at the difference of the shot from behind taken now versus the first picture.  She looks full and healthy - no more angles and bones. 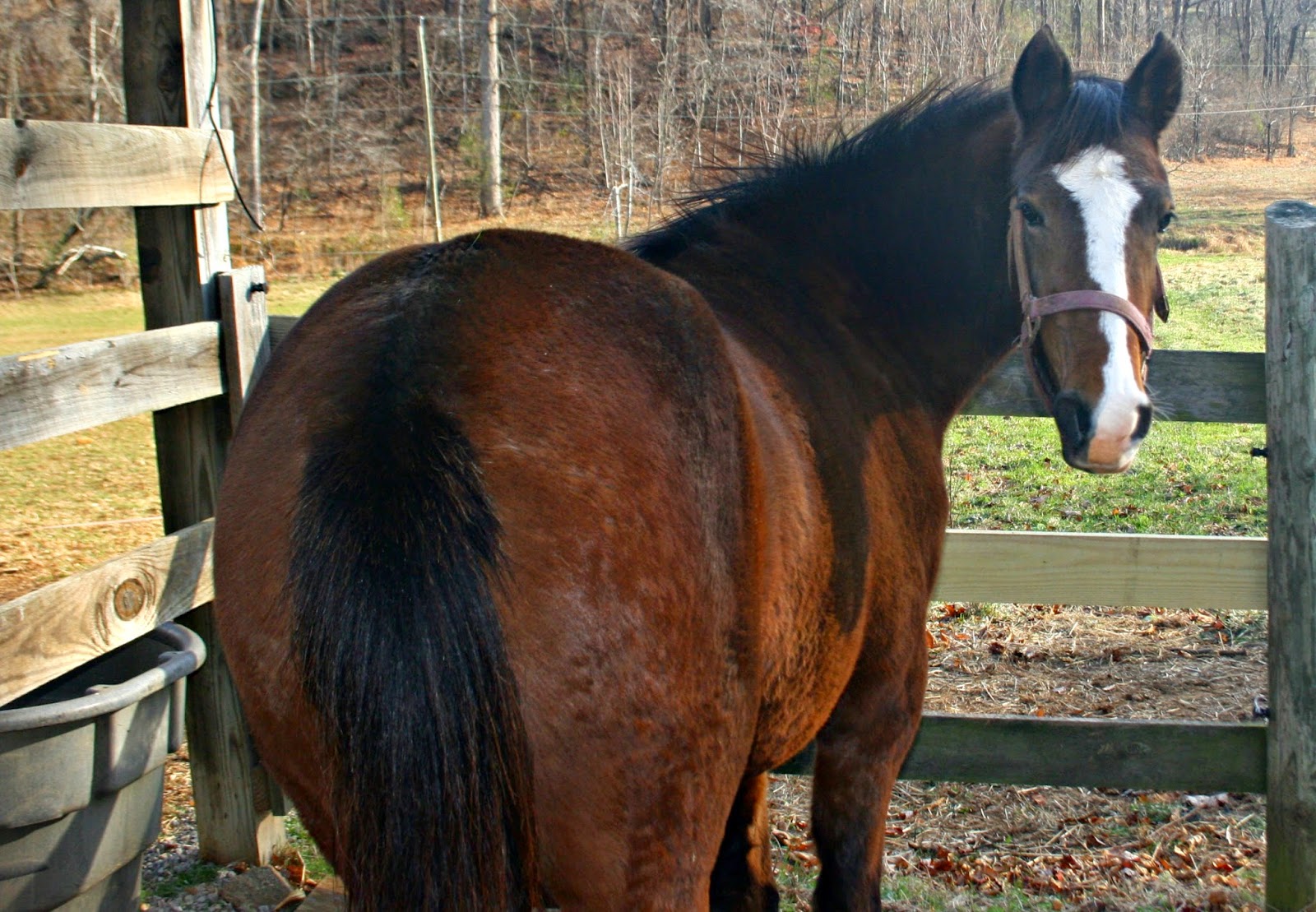 I wasn't really sure what I was getting in to when I brought her home that day, but I'm happy we were able to offer her a safe home.  She has come a long way in a year!  She will always have stunted growth (she will not grow anymore at this point) but at least she is living a better life.

Also, for those of you who offered support for the two horses left behind, you'll be happy to hear that they look much better too, since they were dewormed and vaccinated and the one was gelded, and the owners have done a much better job over the past year of keeping hay on the premises.  While they may not look 100%, they are in such better shape than a year ago!  Thank you.

So glad you saved her from what would have been a terrible life...:)JP

I would take her now, you did wonders. Too many horse people around me to let this happen.Do you plan on keeping her?

Oh Lisa you are my Hero:) Francine looks beautiful. To all the people that helped you with this and the other horses you are Hero's too. Hug B

Francie not Francine but I do like both names:) sorry Francie. B

It's always amazing what a caring, compassionate heart can accomplish. Good stuff!

all because of you.

Thanks for the update. Francie is looking so well and I'm glad that the other horses are being minded too.

It really is your own early Christmas miracle! You were so patient and it took so long. And you did it all because of love and kindness. Even with your extremely busy life. You are a wonder, and so is Francie.

She is beautiful! And you are beautiful, too, Lisa, for giving her a good home and life. Just yesterday, as Larry and I were driving through Bedford County, we saw some horses and I told him that last Thanksgiving is when you walked down the road and came back with Francie.

She looks so good now - thanks to you! What a gem you rescued.

Thank you for helping her! She looks so beautiful and healthy!
love
tweedles

Lisa, it's almost unbelievable. You have given her a better and healthier life. Thank you for sharing Francie with us. I'm glad to hear the other two are doing some better.
xoxo

She looks fantastic, I love what you have done for her.. and the horses down the street. It took courage to approach your neighbors and you did it the right way with a great result.

Francie have found her best place to continue her life. Yes, with you...

Yay! You are a hero to horses.

She looks better nd I am sure feels better to :) You did awesome with her!

She looks great now, so glad you saved her.
You have done a great job :)
Enjoy your weekend

you are Fabulous! and she looks beautiful!!! the year went by so quickly!

Lisa, you are amazing, and so is Francie. So glad you found her.

She was worse than I even thought. Bless your heart and hers too. I am so glad you did what you did. Some people just look away.

One of the happiest blog stories I've ever read from start to finish.

She's a beauty. I'm sure her heart is in much better condition too because she knows she is loved. :)

And I know I've said it before, but you're a gem, Lisa. A total gem. Not many people would do what you did for Francie.

You did really well with the horse, Lisa. Wish more people would step up and help animals who need it.

What a wonderful difference you have made for her !

What a big change and how blessed she is for all that you have done for her!