Before now, I have been first female in only one race, way back in 2008.  It was a small 10K in Danville.  It was at 5:00 and very hot, but it poured rain during the race, which helped keep me cool.  I got a huge trophy. 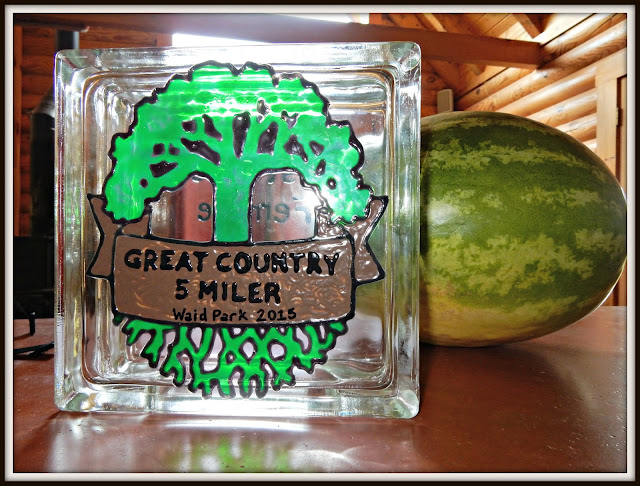 I don't do a lot of trail races.  But the Great Country 5 Miler is at a local park that I enjoy, so I figured I'd give it a shot.  It was hot and humid the day of the race.

The race was very hilly.  I think the first hill was over half a mile long.  There was another wicked hill towards the end of the race.  And lots of little hills interspersed.

I never thought I'd win.  A female passed me and took the lead a mile in.  She seemed strong and I couldn't seem to catch her.  It wasn't until the last mile when she seemed to slow down just a tad, that I got the opportunity to pass her again.  I was so tired at that point that I figured she would just pass me again before it was all over.  I am not accustomed to winning.  This was a VERY small race.  The previous year, had I run it, I would not have been first.  With the heat and the hills, my time was slow.  I got lucky.

I won the above pictured light box.  It says first female on the other side.  You fill it with Christmas lights.  I've also seen them filled with tissue paper.  It was fun to win something different than a trophy.  I also got a watermelon door prize.

Two weeks after this, I ran a 5K at the beach on the 4th.  I ran poorly and was disappointed with my time.  But I knew it was a good speed workout, so no regrets in running that day.

That's the thing about racing.  You just never know what will happen.  Maybe that's what keeps so many going back for more.

" You just never know what will happen. " is true with everything in life but you keep going back to try :) Love the trophy it is a nice one and the watermelon is a nice bonus. Well done.Hug B

Congratulations Lisa, well run! What a fun trophy, and I hope you enjoyed the watermelon, yum.

Nice to see you getting out. They have had a lot of run, kayak and bike races around me that total 17 miles. Next week is the bike ride across Iowa, a fun one to join in.With a crowd one can travel 16-18 miles in an hour.

I admire you for running those races and the trophy you posted is priceless! I cant even walk to the mailbox, so you can see why I think it is great that you run the races. Congratulations and here's to winning many more!

Way to go, Lisa! Proud of you; an inspiration to others always. :)

It's good to have a hobby that keeps you in shape and doesn't cost a lot. Most of my hobbies are expensive and don't involve a lot of physical exercise, which is why I have to work on an elliptical. You get to have fun and stay in shape at the same time.

Congratulations! That is awesome. I don't think it's luck; you're a pro!!!
How cute is your award??

I have sometimes envied those who run and enjoy it and do well. For whatever the reason, I've never felt "good" when I've been out running.. meaning it feels like it's hard on my body, even though I'm reasonably fit. My knees and neck complain. So I settle for walking and hiking. Good for you!

That's a sweet trophy!
No more running for me. Not unless I want a knee replacement by age 50 anyway.

Congrats Lisa. You are right in that so many factors play into a runner's performance, one never knows what will happen. I prefer the shorter runs as I am more of a sprinter, and the trail runs at least keep me focused on where I am putting my feet--as compared to a long road run where I am looking at seemingly endless pavement.

'grats on the win! :) I think you're right, the unpredictability of races does entice people back. It's fun to have that constant challenge.

How nice, Lisa! I'm very happy for you. You sound like you had no expectations, but your endurance paid off. Regardless of results, you showed up and participated which is itself a huge accomplishment. Cool! :)

What a great trophy!! Congratulations to you..