A few weeks ago, Reid got stung by a wasp.  We didn't think much about it.  He's been stung before.  The next morning, his finger where he'd been stung was a little swollen.  I sent him off to school.  When he got home, his hand was extremely swollen and had one blister.  We loaded into the car and headed to Urgent Care.

The doctor we saw at the Urgent Care didn't like the look of it, and sent us on to the ER.  It was a very busy Monday night in the ER.  There was nowhere to sit and they ran out of wheel chairs.  We saw a number of people in handcuffs with police escort.  Must've been a full moon. 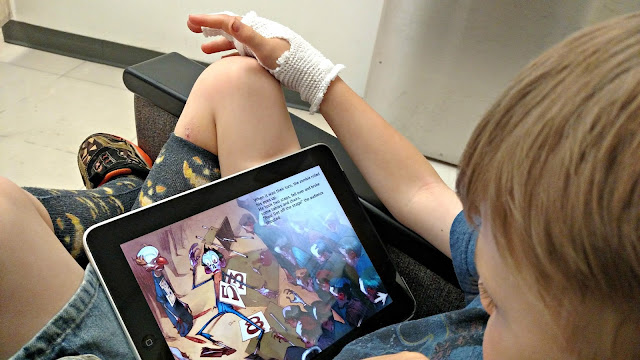 They put some gauze on Reid's hand for compression and marked where the swelling was so they could track it.  After a couple of hours, they sent us home with antibiotics and Benadryl (which we already had, but I guess you can never have too much).  The following pictures are a little gruesome, so if you don't want to see them stop reading here! 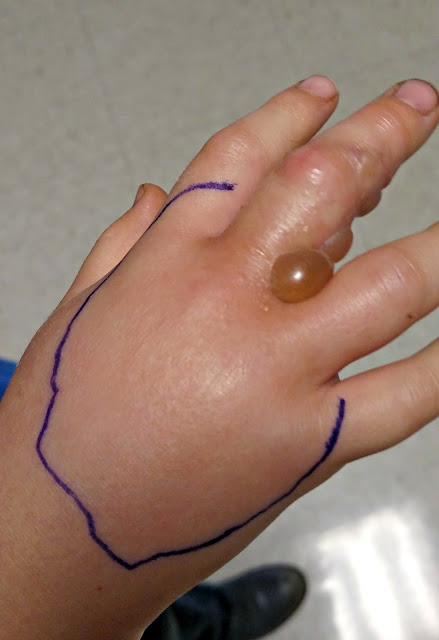 Here is how his hand looked the next day.  The swelling wasn't as bad, but he had new blisters, and couldn't move his fingers.  We went in for follow up and they were concerned that he could have an infection in the tendons or bones, so they did blood work and x-rays. 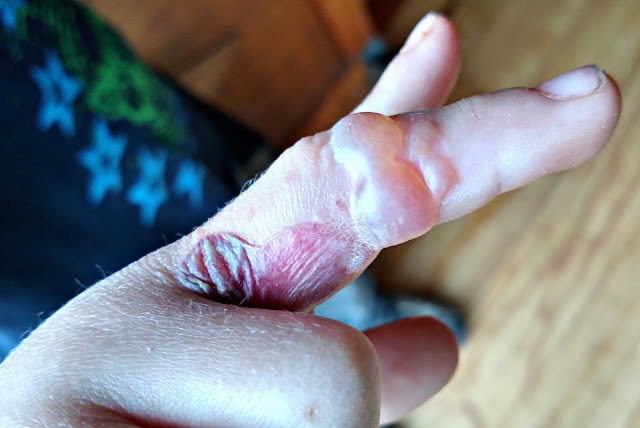 Luckily, there was no infection.  Here is how his hand looked several days later, when the blisters started to pop.  By the fifth day after the sting, his hand looked like this: 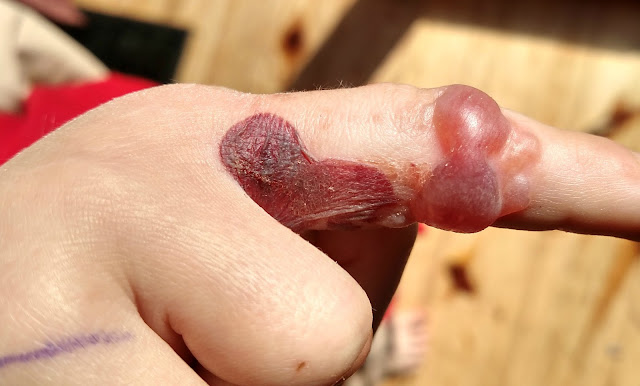 Finally, a week after being stung, all the blisters had popped and the swelling had gone down enough that he could move his fingers into a fist again.  One of my nursing students told me that the combination of Zantac and Benadryl was similar to an epipen, because they work on different histamine receptors.  So we now have some Zantac in the medicine cabinet, just in case.  Reid will go see a pediatric allergist in August to find out if he is truly allergic to bee stings, or if it was just a weird one time reaction.

Readers, do bee stings bother you?

I've never seen such a reaction to a sting. That looks so painful for such a tiny little guy. Thankfully, I've never had a reaction to a sting.
Our home had shutters by each window across the front. Every summer, wasps would make nests behind the shutters....I could hear them from inside the house! We finally made the decision to just remove the shutters to prevent stings while we were working in the flowers beneath the windows.

Never saw a reaction like this. I am allergic to honey bees, but have been stung by wasps and do swell, but no other complications.It almost looks like he got in some horse parsley,it blisters if in direct sun like that.Keep the histamines around, it is a guy thing it seems to have a lot of accidents. LOL

Oh that was a bad reaction for your little man to have. Hopefully it was a 'one off' incident and won't happen again.

Poor guy! That looks really uncomfortable! I'm not allergic, but a few years ago, my Mom got stung by a hornet on her lip. A few weeks later, she got stung again, but in a different spot, and her lip swelled up! She now has an epipen, just in case.

wow that is some reaction, I worked in the ER for near to 30 years I remember shifts like the one you describe- and I've seen some nasty stings, this is right up there, glad Reid is on the mend and Mom and Dad too I imagine ;-). I've done some catching up you've been busy (we've 5 weeny lettuce plants :-0 to your endless rows.) gorgeous garden and fence!

Poor boy! That looks extremely uncomfortable and painful. It has been a while since I've been stung by a bee. When I was a child, I was stung by something--probably a hornet--on my eyelid while at church one Sunday. My eye swelled to huge proportions. My mom finally took me to the doc on Tuesday and he fussed at her for not bringing me in sooner. He gave me medicine and said to keep it on hand--I think it was prednisone, but not sure. I didn't know that about Zantac. I will keep some in our cabinet too. I never know when I'm going to have a bad reaction to something. And sometimes what doesn't cause a life-threatening reaction one time can do so the next time.

Oh My Gosh... Poor little guy. After raising 3 sons myself, I thought I had seen it all. BUT--we never had anything like this happen... Glad he is better. Bless his heart.

So far I've been fine with getting stung.

The blisters that he got I had in the fall. I was cutting open a pumpkin, and it touched a burn I had on my arm. It blistered up just like that. I went to Urgent Care. They sent me home with steriod pills and steriod cream. I didn't realize how bad the blisters were until I took pictures. they were on the back part of my arm (not a spot I sit there and look at). Travis told me he was growing pumpkins. I told him that I need to wear long rubber gloves when I cut them up. The crazy thing is that I don't notice a reaction when I eat them. I never get allergies because you get shots for things you are allergic to, to put it into your system. Then the things you are allergic to you are supposed to not eat. Shouldn't it go into your system as well? I just never have gotten that. I do know pumpkins are related to ragweed.

I hope Reid gets better really soon. I hated my blisters. I'm sure he does to! You guys live in an area where he could get stung often. Good vibes to him!

WOW.. I have never seen a reaction like that one. Let us know what you find out about it with the allergist. My son used to swell up pretty good, but not anaphilactic, (I bet I spelled that wrong).. and no blisters. As he has gotten older (now 20) his reaction is far less swelling.

Oh, that poor little Reid. I'm so sorry that happened to him.

My dad was allergic to wasps and bees. One day he came in the house and passed right out on the kitchen floor. One or the other had gotten on his eyelid. Thankfully, he was okay.
xoxo

Poor kid! What a scary experience. We've never had any adverse reactions to stings, thankfully, but we've had a ton of wasps around. Kinda goes with the perpetual summer thing.

OH Lisa!!!!! Poor Reid! Did it hurt a lot? What a trauma. At least he did not have really bad allergy symptoms, like mouth swelling etc. Poor baby. I have heard though, that it takes two stings for an allergy to develop. My allergy tests did not show bee venom reactions, but I still avoid them at all costs. I am terrified of any flying stinging bug. I have never been stung but Phil and our son have. Keep us posted! Give him a big kiss from me.

Wow! We have had bad reactions here, but never with so many blisters. Poor guy!

I've been wondering how this played out! Glad it got better!! And hopefully it's not a bee allergy!

Oh my, I've never seen anything like that. The ER was a good idea!

Gees, Louise! That is NASTY! Poor guy. I would pursue that too...I wouldn't want that to happen again. Yikes.

Oh my gosh! We hope Reid is feeling much better! So scary!
Never have seen anything like that!
(me the mommy) swells up,, and the stings are so painful, and cause shortness of breath in me)
Your a good momma to get him checked over.
love
tweedles

oh my gosh that is dreadful! ive never seen a reaction to a sting like that. sending much healing juju and keep those stinging bugs away.

I've never seen anything like that from a wasp sting, Lisa. That was awful for the poor little guy. Maybe M and I should put some Zantec in our cabinet. She swells up if a hornet hit her.

The ER was a good move. As kids, my parents (old school) used baking soda and water--useless. We had a hive so large that we called the local Fire Department and they dd a "controlled burn" of that bush, believe it or not.

Oh, poor baby! I'm not allergic, but my father is extremely allergic. I've never seen a reaction like this before though. Ouch!

My dad was allergic to bee stings. He had a series of shots to desensitize him.

Oh my goodness! That swelling and those blisters are no joke. Reid must have been so brave! I'm glad to hear that everything is back to normal again. I've never seen such a nasty reaction to a sting!

My husband and I both had bee or wasp stings and allergic reactions about that same time. We used sting swabs and later took Benedryl. We also used ice packs almost immediately. All of that helped. No blisters! Linda@Wetcreek Blog

When I was 6 years old, I stepped on a sweat bee, and my foot just swelled up, but was down the next day. When I was 36 years old, I was working at Wal-Mart. I was walking through the back room going back to work in the bakery, as a cake decorator. I decided to use the front restrooms before returning. I swung my head around to try and pop my neck, and I was stung in my neck by a yellow jacket. Wal-mart had more than enough benedryl on hand, but it wasn't enough. My managers took me to Seacoast Redicare, and from there I was taken by ambulance to the ER. I was fully tachycardic within 30 minutes. I spent 6 hours in the ER until it was safe for me to go home. They say allergic reactions only get worse with age, and I'm 47 now and I have to carry 2 epi-pens whenever I leave the house.

Oh my gosh! My daughter got stung by something yesterday. (She claimed it was a bee) but she’s only 4 years old. Today her finger is swollen 3x the size of what it normally is and has blisters popping up. I just got back from urgent care. They prescribed her a steroid and antibiotics and said if it starts to spread to her hand to take her to the ER. She also cannot bend her finger. I’m so frazzled by all of this and starting looking up bee stings when I came across this post. How did things turn out for your son? Was he “truly” allergic? I wonder if it was a wasp or a bee that got my daughter or if it matters?

Hi Lisa - same question from me. My wife got stung a few days ago and now has very similar blisters to what you show in the photos. What did you find out regarding allergies vs 'one time reaction'? Thanks!

Well, I got stung by a waspe two days ago, and my ankle looks a heck of a lot like your kid's hand...which is oddly reassuring. Yes, I was 100% looking for "large local reaction day three" pictures. Thank you for sharing this!