The day after school let out, I woke the boys up early and told them to load up in the car because we had errands to run.  They didn't say much until I merged onto the interstate headed north.  Pierce asked where, specifically, we were going.  I told him a grocery store, a camping store, and to pick up some books.  They were quiet a while longer, but then started asking again.  I told them the camping store was "a ways up the road".

We ended up at the Green Valley book fair, and they were delighted I had tricked them.  After picking out books, I strategically loaded them up with some fast food distraction before merging back on to the interstate - north, again.  As we were passing a sign that said, "Manassas 10 miles", Pierce asked if we were in back in our hometown yet.  Were they ever surprised to find themselves in Northern Virginia!

We had dinner with friends that night and the next day rode the metro in to DC.  Our first stop was the International Spy Museum.  The boys loved the creepy blue light elevator to get inside.  And being able to crawl through the duct work to spy on museum-goers was a huge hit. 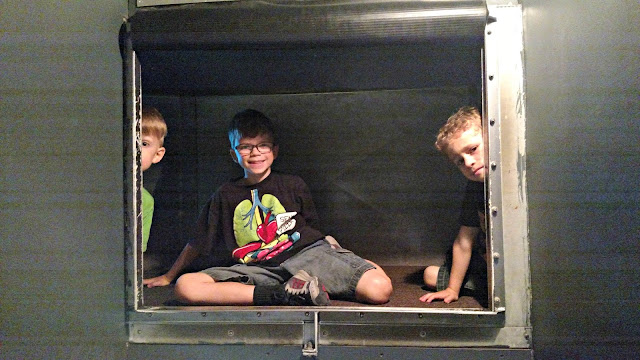 There were many hands on activities mixed in with a lot of artifacts and history.  The boys liked all the buttons. 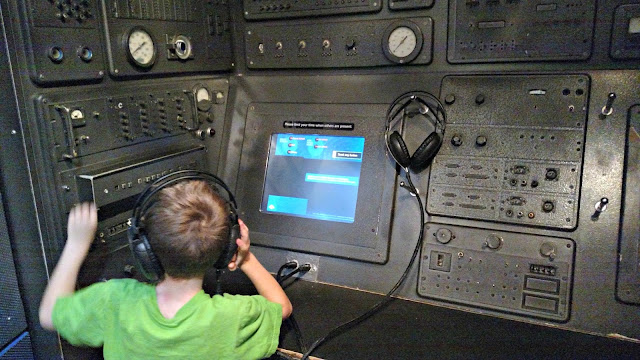 There was also a hallway that had a movie of a shark swimming behind glass, and if you touched the glass the shark would attack it, 'breaking it'.  I wish I'd gotten it on video the first time this happened.  The boys did it over and over and over again.  They love being scared or surprised. 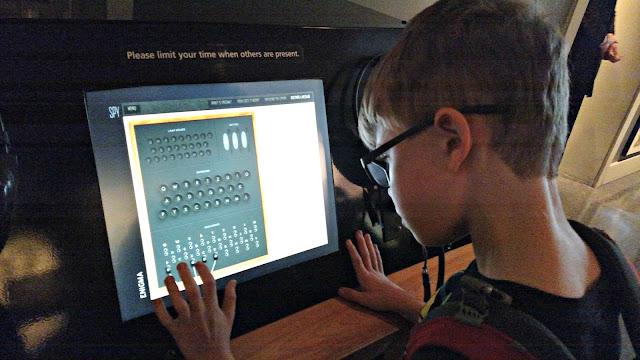 We had an excellent time touring the museum, and although it is not free like all the Smithsonians, I think it is worth the expense for one time.

This is right up little guy's alley.

What a great place to enjoy, I would have played with that shark a lot also.

I've never heard of that one. Neat-O. Maybe one for the granddaughters.

You are a sly one fooling the boys like that, a neat trip to green valley and then a spy museum! By the time school starts they will have lots of stories to tell the other kids.

Don't you just love surprising your kids like that? I used to do the same with my girls. Enjoy your summer with the boys!

You are such a neat mom to give your boys such a surprise treat! I bet the spy museum was perfect for them. I'd like to go there too. :-)

You're such a good mom, Lisa. That trip will remain in their memories a long, long time. xoxo

That looks like a lot of fun and is some place I'd enjoy taking my family to.

Now this is an adventure!

I haven't been to one and surely it looks wonderful. I bet I will try all those devices as well :)

You are the most fun mom EVER! What an awesome surprise for the boys, they will remember it forever. I might even like the shark attack myself! I think my favorite picture is the first one, where they are spying on people. Now all they need is a shoe phone.

We are going there over Christmas break this year--you made it sound even better than I heard it was!

what a fun surprise! we haven't been to that museum yet but we will have to make a point to see it next visit!

OMG they are going to grow up now with a phobia from the time their mother LIED to them!!! The horror.

All little boys should have a mom like you!!!!

The closest museum we have in Omaha to that is: Strategic Air Command & Aerospace Museum. It's pretty cool. We haven't been to it in awhile.

We went to the Spy Museum years ago, when my kids were younger. Totally worth the ticket price. My kids loved it and it looks like yours did too.

We went to that museum years ago...and LOVED it! I liked that they charged a fee because it eliminated the crowds...and the riff raff. They can maintain all of the displays with the money they charge, so it is okay by me.

I hope you had as much fun there as we did. And it was informative too!