I'm supposed to do WHAT with the fleece?

The boredom of being snowed in hit yesterday afternoon, and I decided to dig out a nativity pattern I'd found recently when looking for something else. I bought this nativity after Christmas clearance of 2003 for $1 (I know this because the receipt was still attached.) 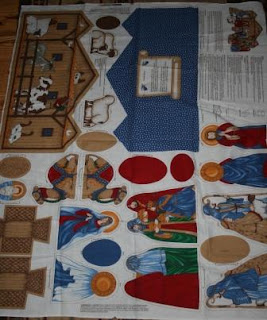 The thing is, I don't really sew. I took home economics in 8th grade, made a stuffed cat with the guidance of the teacher and the world's ugliest fluorescent Jams (remember those?) and that was the extent of my sewing. Nevertheless, I dragged out my machine and blew off two inches worth of dust and dirt. And sat down and read the directions. And then read them again. And again. And then I started with Jesus, because he was the easiest piece. Only I wasn't sure I'd remember how to thread the machine, so I figured I'd better stick with what was already loaded. Which was sky blue thread. Which didn't match the majority of the pieces, but hey, who said it had to be perfect? It took a great deal of digging in the basement to come up with some polyester filling. Next thing I know, Pierce is begging me to make Baby Jesus's bed. The manger is more complicated, involving some mysterious technique called basting, and some sort of stiff stuff called interfacing. This involved a call to my mother, to figure out what to do. I was advised to just use some stiff material. The manger didn't come out so great. But the nice thing about three year olds....they don't know the difference. 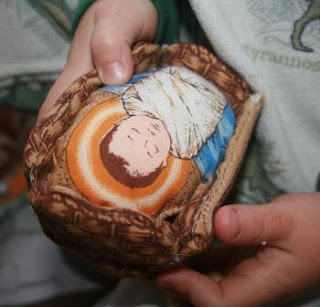 The hardest part to figure out, by far, was the stable. I read the directions so many times and they still didn't make sense. It's like another language, this sewing stuff. So another call to my mother. What is polyester fleece and what do you think I'm supposed to do with it? I ended up substituting an old bath towel. Here's the back of the stable: 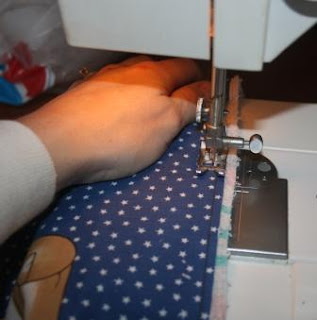 24 hours, 3 removed seams, 8 misthreaded needles, 2 calls to my mother, and one rather large vodka cranberry later:

It isn't perfect. The corners are messy. There's that whole issue of sky blue thread. And the people are a little lumpy. But do you think my toddler cares? Nope, he loves it. And next year so will the twins. Because this is a set that won't break and doesn't involve small pieces. Absolutely perfect for my herd of boys. 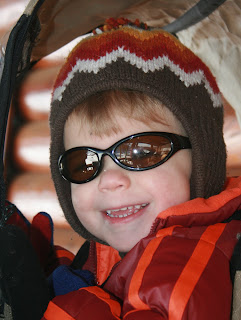 They finally plowed our road. Pierce got back out in the snow. He and Paul decided to hike up the mountain. This is one steep hike, and I can't imagine trying to do it in so much snow. But they like adventure that way. 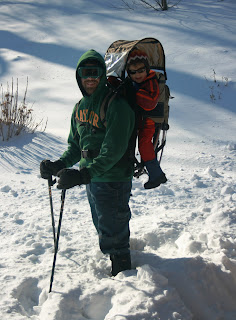 Email ThisBlogThis!Share to TwitterShare to FacebookShare to Pinterest
Labels: crafts

The nativity looks wonderful! The only way to learn to sew is by sewing. You are off to a great start! Your children will treasure that set for many many years :-)

No snowplow for us yet. Bet we don't see one until tomorrow night or Tuesday. :-(
When you want neat corners, you have to trim and clip your seam allowance. Same goes for curves. Bet there are u-tube video demos at some site like "sewinghelp.com". You could google.
lovemom

LOL its better than what I could do! I can't even sew a button on a shirt. And I'm going to tell you right now that lumpy people are the best. :)