I think we have more stinkbugs than anyone else on earth.  They flock to our house, they burrow into the crevices of the logs and creep into every cranny.  I hate them.  They just showed up a couple of years ago, and each year is worse than the one before.  No exaggeration - I probably suck up an average of 50 a day into the vacuum cleaner.  Disgusting.  We've had Terminex out numerous times and there is nothing they can do for them that wouldn't be toxic to humans too.  So until scientists perfect the stinkbug pheremone trap that is in progress, we just have to deal.  I've whined blogged about how much I hate them before, but it's been a while, so I'd say I'm overdue for a big I HATE STINKBUGS post. 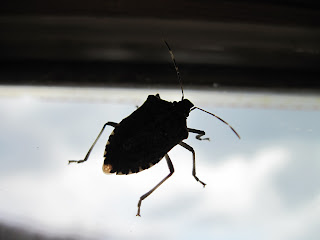 So I have written a hate list.  Thirty reasons I despise stinkbugs (I'm sure I could think of 100 reasons if I really tried, but I don't want to waste that much time on these invasional pests).
1.  They get inside my blow dryer, then I try to dry my wet, clean hair, and it smells like stinkbugs.
2.  They love to get on a damp toothbrush.  So gross.
3.  They don't succumb to the winter.  They just hibernate.
4.  They fly.
5.  They stink.
6.  You flick them and they come straight back to you like a boomerang.
7.  They're ugly.  Butt ugly.
8.  They fly on me when I'm trying to read.
9.  Bug sprays don't kill them.
10.  They have armor.  They're like the knights of the bug world.  Indestructable.
11.  Terminex can't kill them, but they'll charge you $100 to come out and tell you that.
12.  They crunch when you step on them.
13.  They'll ride around on your back without you knowing it.  Lazy buggers.
14.  They're bodies are hard to suck up in the regular vacuum - you have to use the hose attachment.
15.  I hate the sound of them flying overhead.
16.  I hate the sound of them landing right next to me.
17.  I'll go get a bag from the closet and find 40 stinkbugs underneath it in hibernation.
18.  I hate the fall days when they completely swarm our house, looking for a place to hide.
19.  They get around the toilet rim for water.
20.  They leave their stink stains on walls, counters, clothing.
21.  I hate seeing them swarming our light fixtures.
22.  I hate seeing a swarm of them on our windows.
23.  I hate that they seem to like our house so much.  Go away!
24.  I live in fear that they're going to fly into dinner one night when I'm cooking.
25.  They will get on the rim of a glass of water you leave out.
26.  They fly on the tv or any other light source.
27.  They get in the shower, on my soap and scrunchee.
28.  They stink on the twins, because the twins will sometimes play with them.
29.  They are breeding like mad - worse than rabbits for sure.
30.  They outnumber us.  Four million to five.
SAVE ME!!!!

we have ladybus, not the kind in the garden, but a new breed, that swarm in the house in fall, leave in spring. Everyday you clean them up, and they smell too! What is this, a science fiction movie??? I have noticed last fall a few stink comes, is that next? It is a nightmare for sure.

Thankfully, we don't seem to have this (YUCKY!!) problem here.

Ohh no!!! This post just gave me goosebumps! I can't believe Terminex charged you to tell you that nothing can be done!!

When Liv and I first moved to New Mexico and the movers were bringing in our furniture, I heard this scream! Wondering what it was, I went over to where it had originated. One of the movers (a big, brawny guy about the size of Hoover Dam)had seen a stink bug and it scared him! Funny to see such a big, tough guy get so scared. But stink bugs are yucky! I have to agree with that!

this reminds me of Kim at Golden Pines. she went thru this mess a bit earlier this year again too! yuck!

lol i love this :) and i am right there with you... HATE stink bugs.

Oh I am right there with you, sister. This is WV Stink Bug Mecca.
They are disgusting (and aside from that, so damaging to certain crops!).

So sorry about the *S* bugs! What a pain!

How cute was Home in the Hallow's powm :)

Uggghhh we have them too but they aren't even close to as bad as you have them. YUCKY! The whole in the blow dryer thing is making me cringe a little LOL.

Holy Cow!! You've got them BAD!!!! I can't imagine!! I did a post on stink bugs awhile ago, and they came over here from Asia. They have no natural enemies! They have been in the paper and were on the news last night, because Virginia is overrun with them now, and they are destroying fruit crops from the inside out. There are several different types, my friend in Florida has the green ones. Well, we have earwigs, and they get in the toilet paper and paper towels. I once actually wiped my private parts with an earwig. I heard this little clicking and thought something was wrong with me, ewwww! Hope you have a great Mother's Day!

Eww! What an awful plague! Growing up our house was often infested with Rolly Pollies! They were kind of fun though!

They sounds worse than locusts! I won't want them on my toothbrush.

Oh my gosh, I think I'd need to be medicated to deal with that. That's HORRIBLE!

I don't like them either...those buggers ate my green beans last year.

Hi Lisa,
It was great hearing from you. I had no idea that stink bugs could not be exterminated without hurting humans. Wow...my heart goes out from you. I guess that is one good thing about living in the cold Alaska...no stink bugs to deal with -- too cold.

Thank you for the encouraging words about my exercise. I got in two swimming workouts this week because of it. It was fun hearing that you do Ashtanga. So are you are joining the 400 Miles in a year Fitness Challenge? If you are you can count 15 minutes of any other strenuous exercise as a mile of walking. Basically, Ellie said that she was basing everything around walking. So you would have got really high numbers by her calculation. It all depends on the minutes it took you do them.
I hope to see you join us!
Cheers,
Shanae

What does a stink bug smell like - a skunk, a dog ???? I have no idea! I've never smelled one (at risk of sounding all hoity-toity!)

Oh my goodness - Lisa - I hate to tell you this, but I saw them on the news - and they are extremely hard to get rid of. I'm sorry. Wish I had better news.

I hate the thought of stink flys.

Oh how well I know and understand your list, Lisa. My hubby and I were talking about stink bugs just a couple of nights ago. These bugs came from somewhere in Asia, and until they can find an animal or predator that kills them I guess we'll just have to live with the crazy things, like it or not. Hubby retires in a couple of years and I want to move somewhere where there are no stinkin' stink bugs!!!

Holy cow! I was thinking of doing a post on the love bugs we have here in Florida, but I feel whiney now. The love bugs are a pain but compared to your stink bug problems, they are a walk in the park.

Eeeek! I am not sure how you handle the stink bugs...but I think I would be the most paranoid person on Earth...do you have a net over your bed when you sleep!?

Ewk! I'm glad we don't have those here...they sound horrific!
Post made me laugh though...
I hope you had a great Mother's Day!

OMG! I will take scorpions and snakes over stink bugs any day...I agree that they are so gross.

yuck! We have stink bugs at work. I hate when I'm charting something on the computer and one drops from the ceiling right in front of me.