The Cat Circus Comes to Roanoke

A few weeks ago my running friend Trina invited me to go see a touring Cat Circus.  The tickets were a little expensive so I couldn't take the whole family (plus, Paul made fun of me for wanting to go).  But I bought a ticket for myself and Pierce.  At the last moment, Pierce decided not to go, so in the end I took Cort with me. 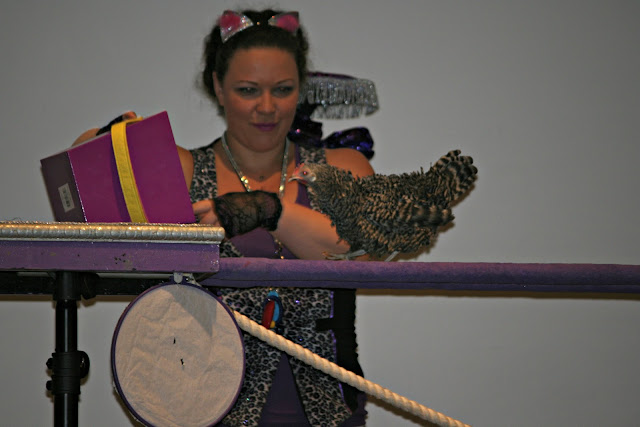 It wasn't just about cats.  There were rats.  And a chicken named Gregory Peck.

And a groundhog.  Whose name I don't remember.  But I do recall that he could bowl.  Yes, bowling.  Like the sport. 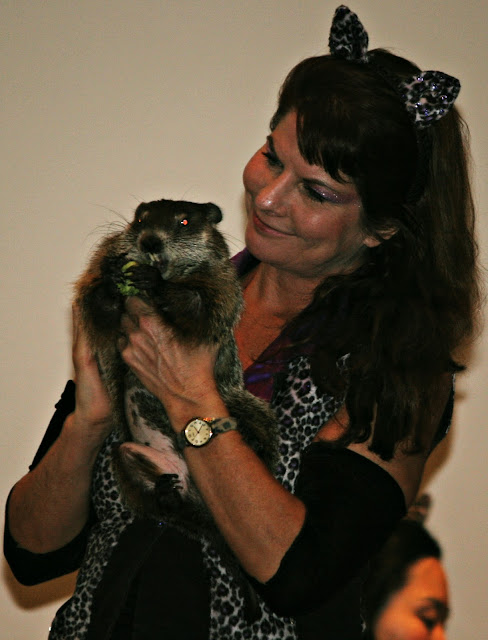 This is Tuna, the superstar of the show.  He took his job seriously.  All the cats are trained using clickers and whistles. 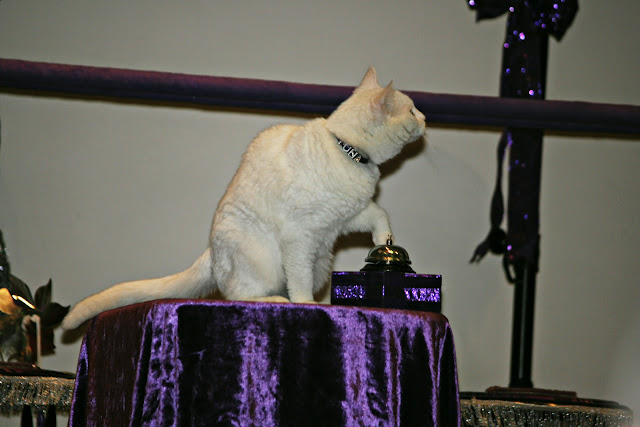 This is Oz.  Not all of the cats do what they are supposed to do all the time.  And all the cat lovers in the audience understood that.  As did the performers, who made a lot of hilarious jokes about cats.  It was part comedy act, part circus. 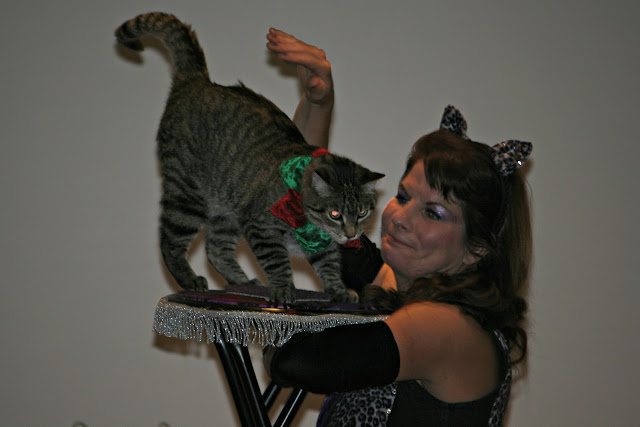 Some of the cats were rescues.  There were even some kittens in the show that were being fostered. 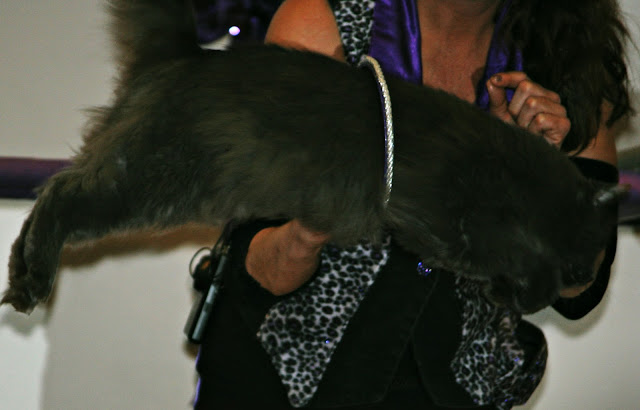 Cort's favorite part was when the cats would jump off the stage to wander around the audience.  He would get so excited when a cat would pass under his chair. 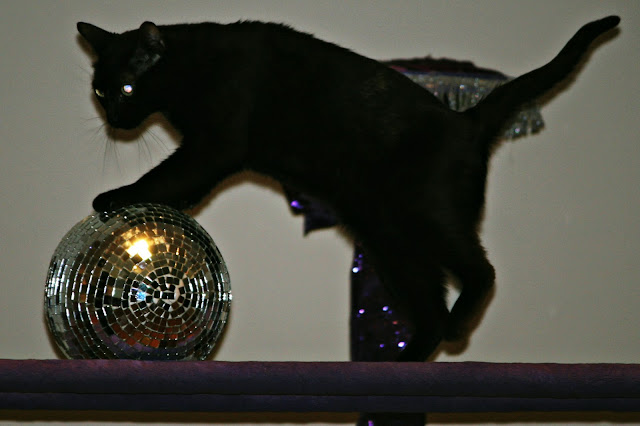 Part of the proceeds for the show went to a local no-kill shelter where I used to volunteer before I had kids.  So I was happy to know part of my ticket purchases were helping them. 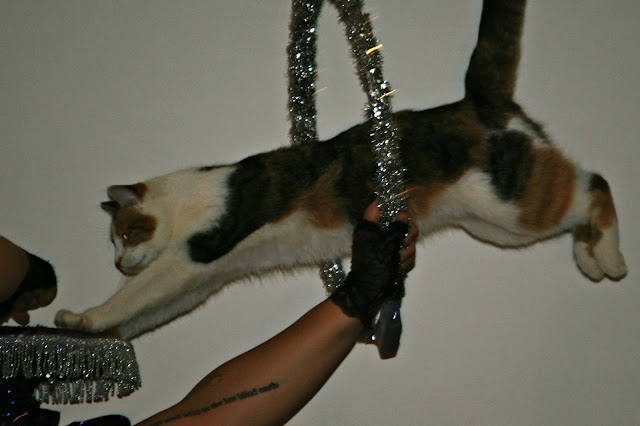 The cats all seemed to enjoy doing their part - after all, many of the tricks they performed are things that a cat can do anyhow. 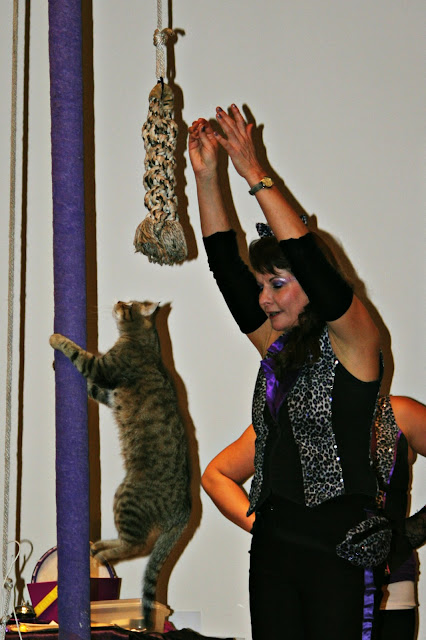 I thought this orange cat was gorgeous.  I've always been partial to long haired orange kitties. 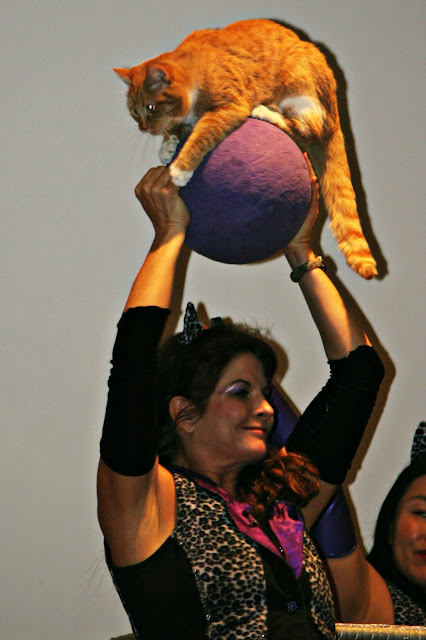 The big finale was The Rock Cats band.  The cats actually played the instruments.  And in the bottom right corner you can see Gregory Peck on the tambourine.  The music wasn't pretty, but it was amusing.  The lady behind me laughed so hard I thought she'd fall out of her seat. 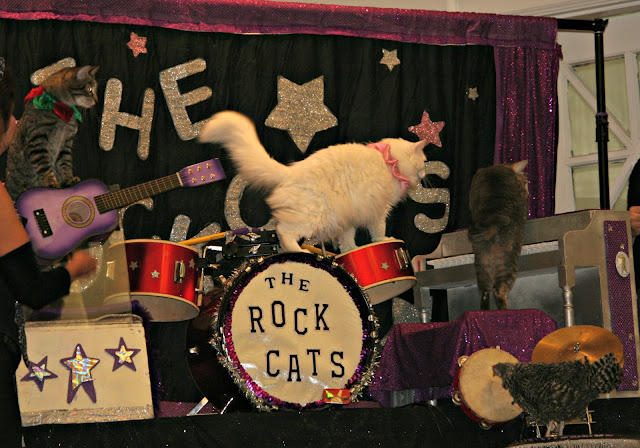 Tuna played the cowbell.  He was very good at it, and devoted.  I think he would've played cowbell all night long. 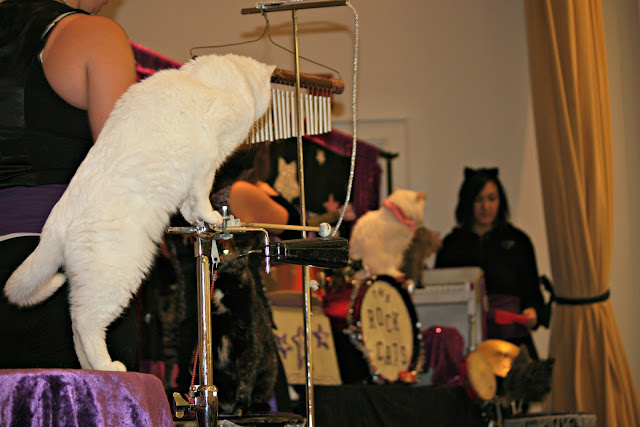 What a way to spend a Sunday afternoon!  Readers, are any of you fellow cat lovers?

I adore cats! This show would have cracked me up, and how wonderful that part of the proceeds went to a no-kill shelter!

I've always loved cats. I had a cat, Jennifer, who loved to play fetch just like a dog. And then there was Sparky, the orange tabby super cat. My friends and I were standing by the road when, to our horror, Sparky was crossing just as a car came by and SLID both tires over him! He popped up like nothing happened with no injuries whatsoever.

This is a riot! I'm not big into cats, I think because my mom and brother are both allergic. But, my cousin and aunt are definitely cat lovers, and I think they would definitely enjoy a show like this :-)

I've never heard of a cat show like this before, but what a wonderful way to raise money for the shelter!

Nope... it's dogs that rule this house and cats are not allowed. They are too sneaky for my taste. LOL

Looks interesting, though I don't like circus, I always have this feeling that animals are being mistreated.. probably or hopefully not the case, but..

Oh this is fun I am sure after hearing about it Pierce was sorry he had not came. Cort must have loved it I am sure it was a sight to see. I know I enjoyed it. B

How fun.... cats are so hard to train too... well, at least for me they have always been hard to train. I guess this lady knows what she is doing.

Cute! You'd have to have a lot of patience to work with these animals. In my house there's a saying: Dogs rule, cats drool. :)

Did Cort have fun? I have never seen anything like that at all - looked like fun - especially with the other animals. sandie

Oh my gosh, I would have LOVED this! I have never heard of such a thing. If you tell me the name, I will Google it, maybe they will come around here or nearby. And you caught them going through hoops, awesome!!! ALL the pictures are really good! Why did Pierce change his mind?

I found it on Google, it is Acro-Cats.

They live in Illinois and travel all over most of the country! I will settle for the video on their website.

Now that's some smart cats !!!! Have a wonderful day

Anyone who can train cats could run a business or even the UN. I like cats but they seem to be one of the animals that think they should be treated as equals and so do so when I can, feed them, pet them and then let them go and do as they wish.

haha I have never heard of a show like this, bet it was great. What a wonderful afternoon with your guy. We are more dog peeps over here but once we have a barn i'm sure cats will follow.

Have a great day!
Jen

I'm more of a dog person, but I find these kitties, and the other animals pretty hard to resist!

Hahaha! What a funny, but FUN concept! I'm glad it was entertaining.

That actually looks like it was a fun show! Hope Cort enjoyed it too.

Even though they are of of the things I am highly allergic to,my love for felines has always taken precedence, Baby Girl! And I could not agree more...that orange one is beautiful!!!...:)JP

Well, gee whiz Lisa -- you have all these animals at home. You could start your own traveling show. Just kidding -- the chicken on the tambourine would crack me up as well.

This Bear is definitely not a lover of cats. They kill way too many songbirds. As in 200+ per year, per cat. There was recent research on that.

Although Sunday's event does bring a new meaning to the words "Cat House."

How have I never heard of a cat circus until now?! I am a huge cat lover so this would be so fun to see! And there's a chicken, too? I'm sold :)

I'm glad you and Cort had a great time though.

My mom would have LOVED this!

LOL! This looks like it would have been so fun! Love these pics and the groundhog!!!!

I would have loved this show. And how great that some of the cats are rescues, and part of the proceeds go to a very good cause.

I bet it was fun to be surrounded by other cat lovers. And to have the kitties come out into the audience.

I would have enjoyed this!

I am a cat lover. I would have liked to see that show. Its great part of the proceeds goes to a no-kill shelter.

Now I want to go to a cat circus. A few minutes ago I didn't know they even existed!

I never heard of a cat circus but it looks like fun!

I would have went with you! I LOVE that sorta dorky stuff. Love the outfit on the lady---wow. Nice cat ears.

me and my daughter once went to "Hedgehog Olympics" held at a nearby hotel. You bet I went in after seeing the sign--I HAD to see what that was about. Yeah, it was hilarious.